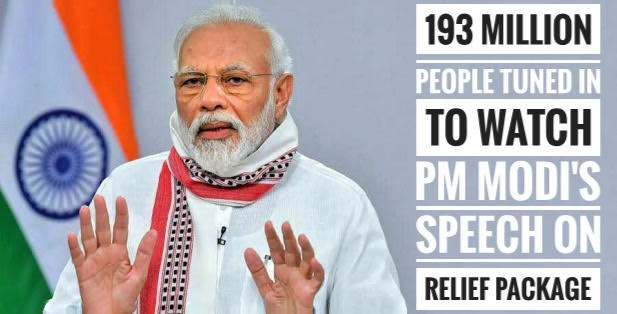 On Tuesday, Modi declared a stimulus package that makes up 10% of India’s GDP to assuage the pernicious effects of the lockdown that has left lakhs of people without work and shrunk businesses at the verge of indebtedness.

But Modi’s proclamation of the second phase of lockdown on April 14 surpassed all viewership with 203 million spectators across 199 TV channels, his message for a nine-minute blackout as a tribute to the frontline personnel on April 3 drew 119 million viewers in 199 channels, declaring the first phase of lockdown in March had attained 197 watchers of 201 channels and his pronouncement to follow Janta curfew in March reach 83 million across 192 channels.

Last year Prime Minister’s address on Article 370 in the month of August had grabbed 65 million spectators across 163 channels and the demonetization in November 2016 had drawn 57 million people114 channels.