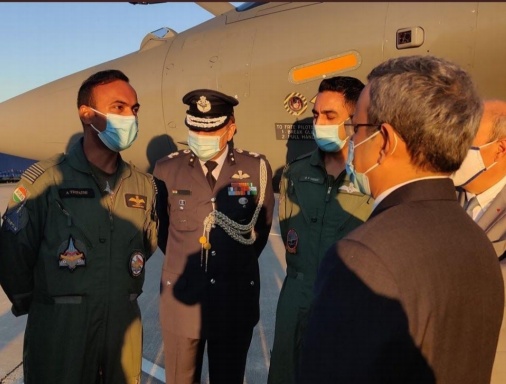 The most awaited moment had come.
Under the Congress government rule before 2014 , India had proposed to buy 126 Rafales
jets. After that, Bharatiya janta party government dismissed that agreement and proposed to
buy 36 Rafales fighting jets.
The first batch of 5 Rafales craft took from France and will reach India on 29th july said by
officials.
The jets will land at Ambala Air force Station to join the Indian Air Force . Indian Airforce had
prepared significant things necessary for these flying jets.
These 5 Rafales are significantly going to boost the Indian Air force Strength. These flying
jets are likely to be deployed in the area of Ladakh sector. This will surely enhance Indian
Airforce’s operational activities amid ongoing standoff with China along the line of actual
control.
These Rafales are very deadly aircraft and are extremely swift and versatile. These
multipurpose rafales are both beauty and beast.
Out of these 36 Rafales jets, 30 will be fighter aircrafts while 6 are going to be trainee
aircrafts.
These Medium Role Combat Aircraft (MMRCA) will be equipped with Hammer and Meteor
missiles. Meteor is a next generation of NVR air to air missiles (BVRAAM) designed to
revolutionise air to air combat . Weapons had been deployed by MBDA to combat common
threats faced by the countries UK, Germany , Spain , Italy , France.

Besides missiles system , the Rafales jets are actually more beyond a normal person’s
thinking. They are equipped with various specific modification industry Israeli helmet
mounted display , raddar warning receiver, low band jammer , 10 hours flight data recovery,
tracking system etc.
“New milestone in India France defence Cooperation to further strengthen strategic
partnership first batch of 5 Rafales fighters aircraft fly out from Merignac France to India”
tweeted Indian ambassador in France: Jawed Ashraf. He called these jets a mixture of both
beauty and beast.
He delivered his sincere thanks to Dassault for delivering aircraft and French government
as well as franchise Airforce for their cooperation and support.
In return of the Rafales India signed an agreement of worth rs 59,000 crore with France. Last
batch will be delivered in September 2021.