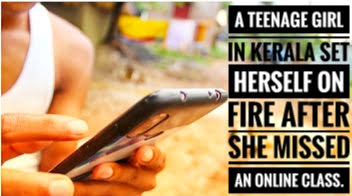 Due to the pandemic-induced lockdown, all educational institutes have been shut down for over 2 months. To compensate for the working days, almost all institutions have opted for online classes and assessments. However, there have been issues of students with inadequate facilities and connectivity problems.

It has been reported that a girl named Devika, daughter of Balakrishnan and Sheeba, has chosen to end her life, because of her inability to join the classes.

The 14-year-old Dalit girl lives with her parents in Mangeri, close to Valanchery. She studies in Government Higher Secondary School, Irimbiliyam. Her Class X portion was being taught online. But the family didn’t have the necessary facilities. They didn’t own smartphones, and the only TV they owned was under repair.

The Police have said that Devika went missing from 4 pm on Monday. And later her body was found in an open spot about 100 m away from her house. Lamp Fuel was found near her dead body and it is assumed that she has set herself on fire.

Though Shaji M K, Valanchery Circle Inspector, announced that any further details can only be revealed after the examination and postmortem, which are currently in progress.

The parents, however, affirmed that the cause of death could be because of the inaccessibility of facilities to attend online classes in their house. They also said that the girl, Devika was a brilliant student and her teachers were proud of her. They said that she was frustrated because he was unable to join the classes of her most important Class X. She couldn’t bear being unable to miss even a single class, they said.

Her parents had told her that the TV would be repaired soon, that much could be done. They also tried to convince her that the schools could provide her with a Tablet PC. But, she was very frustrated by the deficit of facilities in her home. And thus she acted up to this.