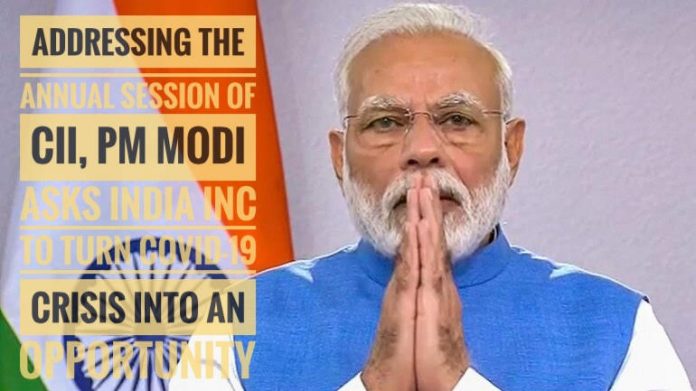 Prime Minister at the annual session of Confederation of Indian Industry or CII expressed his views that the government has taken enough steps to save the fluctuating Indian economy. Focusing on India’s growth story, PM Modi deliberately said that he has confidence in India’s growth story. He highlighted at CII that although coronavirus has affected the economy by slowing down its growth but, surely India will be soon seeing thriving back. Targeting his vision for a self-reliant India, Prime Minister said that India should not remain dependent on any other country for the master plan, despite that embrace its strength.

Modi illustrated that India has the potential, strength and ability as they should go ahead and take advantage of the trust built over the past few months because of the medical supplies sent to the various countries. Now, the expectations from India have grown and churning is happening. Several countries are reliable on India due to which confidence has been grown up, so Indian industries should take advantage of the same. Building its image as a self-sufficient, India has to create a strong enterprise which can become global forces as per the statement given by the PM Modi at the annual session of the Industry lobby CII. India should focus on creating more employment and building vigorous supply chains which can boost the supply chain industries.

India should give importance to reducing non-essential imports at a minimum level and set targets for each sector to increase its productivity which can boost up the economy. PM Modi also added that Indians import majorly air-conditioners, mobile phone and defence items so from our side we are trying to decrease the same. Reforming India is not a random decision but a systematic planned and interconnected futuristic process. He also affirms that think from a logical conclusion about the rejuvenating India. In the annual meeting, Modi signifies that “he has confidence in Indian Farmers, Ministry of Micro, Small & Medium Enterprises and entrepreneurs. Also, he disclosed that he has full faith in the talent and technology of India.”

PM Modi also told the nation that they should give importance to intent, inclusion, investment, infrastructure and innovation which will help them to achieve higher growth. Strengthening the Indian economy against the pandemic is one of the highest priorities as listed by the Modi. Moreover, he says that he has full faith and trust that some decisions are going to benefit them in the long run. Self-reliant Indian economy will not just be integrated with the world but will also be more supportive as suggested by the Modi. He also told that empowering the economy by asking the Indians to create a solution which can define the future of our country. Also, requested the majority of industries to focus on “Made in India” products by reducing the imports and increasing productivity.

Personal protective equipment (PPE) industry which has just started from the level of zero is worth a billion rupees in just three months as recognized by the Modi. He told India Inc to invest majorly in the rural economy and start taking the benefits of opportunities in terms of partnership with farmers. As far as, “Make in India” products are been consider, they will highly draw attention towards creating a job at a larger scale in these sectors- furniture, air conditioners, leather and footwear and work has already begun. By avoiding negativity, the government will provide its supportive hand to India Inc to expand their business at a larger scale. He also told that he targeted to double the size of the economy by implementing the ideas discussed at the annual session of CII.