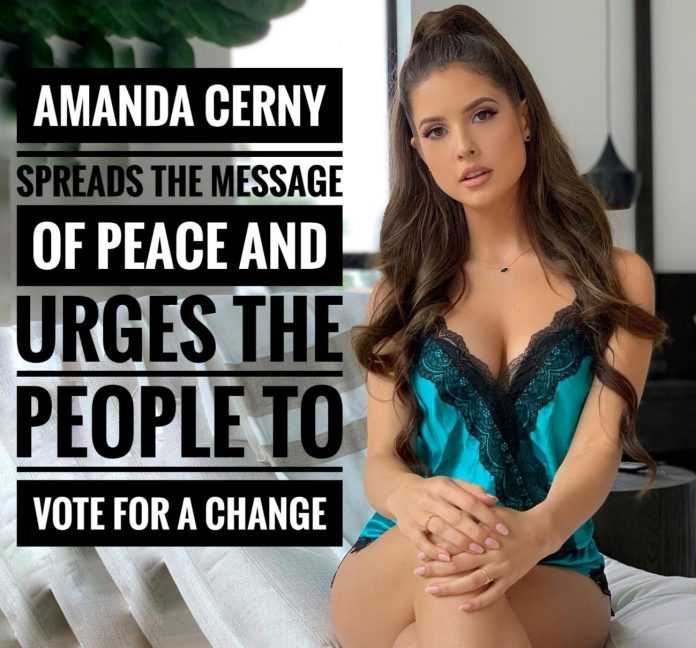 YouTube Star Amanda Cerny shared a post on her Instagram earlier on Thursday, urging the people to vote for a change in the order of supporting the black lives matter movement in the wake of the brutal killing of George Floyd.

Additionally, she insisted on allowing peace and posted that, “don’t attack those fighting for what you are fighting for. Put energy towards the cause. People pick each other apart for not being perfect. Focus on the goal! Fear is created within people voicing themselves when ppl become too critical. Allow unity. Allow peace. Allow progress.” And captioned it saying, “Inspire your friends, family, and yourself to go vote! Just as our parents are told to be a role model for their children. Same goes for those who are in positions of power.”

The young YouTube star and actress educated her 23.1 million followers to get out of their comfort zones and support the black lives, who are suffering more than 100 years.

She further added, it is her duty as a human being to voice over, no matter how uncomfortable it makes her or makes other people because without that getting out of our comfort zone no change will happen. And we need to voice for the black lives because they are minorities and they are the ones being oppressed. We as humans have to come together and stand up for them. Once black lives matter, then we can say all lives matter. Because black lives finally matter. Instead of criticizing them on not doing something great, try to congratulate them and take a step towards the cause.

YouTuber likewise talks about the problems facing while protesting for a cause. According to her, looting is a side effect of protests, which are a side effect of the conditions causing the protests. In this case, the root cause is yet another killing of a black man by a white police officer. To fully eliminate looting, you would have to eliminate the conditions that make people upset enough to protest.

While educating her followers on the importance of black lives she also added that “Violence is never right. Looting is never right. But again, these are symptoms. They need to be cured but we must be productive and kill the disease to prevent the ‘symptoms’ from happening again. The disease which is: ‘SYSTEMATIC RACISM’.”