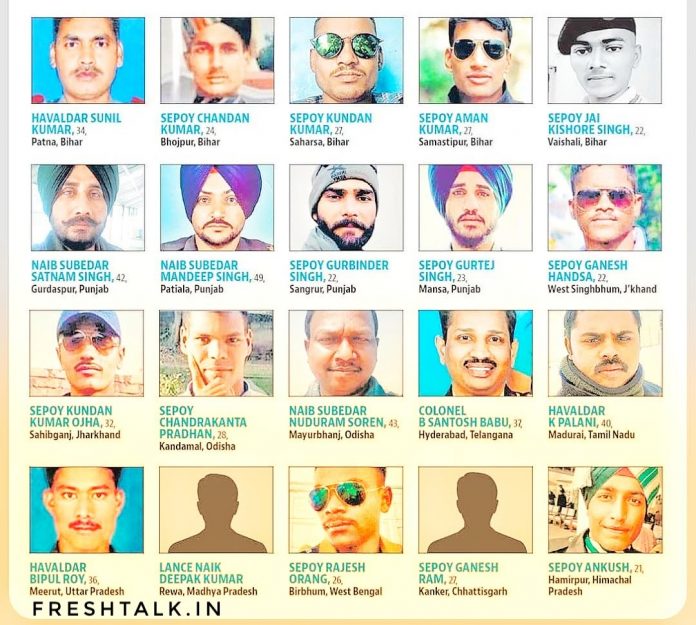 India lost its 20 soldiers who were brutally killed in Galwan Valley during the violent face-off on the night of 15th June.

This was extremely disheartening news for every citizen of the country but even more dismaying news for the families of the martyred soldiers. The people in the army are truly Bravehearts and more than them are their families who send them to fight for the nation. They are fearless fighters, who are the reason behind our families sleeping in peace every night. They fight their lives to keep the citizens safe and secure. They are the reason that we roar in proud as a true Indian. We all truly respect and highly appreciate the Indian Army for its huge sacrifices and spirit.

Also, actors like Ajay Devgan tweeted showing their deep concern and love for the soldiers and the families suffering from the loss.

Tappsee Pannu tweeted writing about the same that as if coronavirus was not enough that we have to bear such heartbreaking news amidst COVID-19.

Then there were cricketers like Virendra Sehwag writing about the same and showing condolences to their families.

They also wrote “indebted to’ these Bravehearts. Truly we are. One can never repay the sacrifices and compromises made by the soldiers on the Indian Army. The whole nation supports them and is proud to have them.

Actor Akshay Kumar has done many movies in which had played the role of an Indian Soldier and he was also seen posting with a picture of the martyred soldier and writing a paragraph for the soldiers.

By posting such articles, the actors and actresses have given the soldiers a sense of encouragement, motivation and a belief that the citizens of the country fully support their army and salute them for their sacrifices and love for the nation.

Only a soldier has the heart to proudly die for the country.

We are always with our soldiers.

India-China Galwan Valley face-off, Everything you need to know