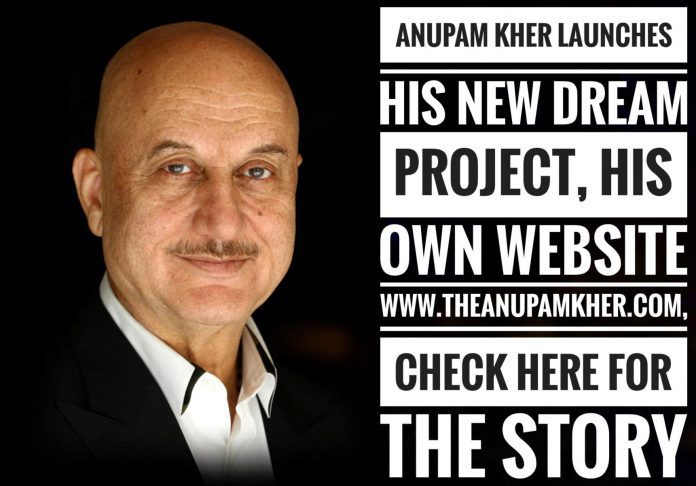 The well-known actor, author and a producer, Anupam Kher has completed 36 in the industry and has remained outstanding in more than one field when it comes to the entertainment. This time veteran actor has declared the digital launch of his play –“Kuch Bhi ho Sakta hai” on his new dream project and website- www.theanupamkher.com. It has been seen that Anupam Kher is one of the most revered actors in the industry and this famous artist has worked in several international projects also.

Today, this grandmaster launched his dream project on his digital portal after which, he starting receiving messages from his fans appreciating for his work on social media site i.e. Twitter. Anupam Kher told when he was doing the shooting for his play, he was going through a financial crisis due to which he had to borrow money as he required an income, so he specifies that he wants to discuss his failures which he had faced in his life and how he used to handle them by laughing at his problems. Also, he told his fans that,” if anybody laughs at their worries, then the world will not get any chance to frighten them. He considers that if nothing else, then “Kuch Toh ho Sakta hai”. During his shooting, Anupam Kher used to meet different kinds of people working at the backstage that used to appreciate him by saying that his play used to encourage them. Mr Kher has received so many emails from his fans in which they have mentioned that they get motivated to go ahead and revive their life by taking the challenges.

The motive of launching this play is to inspire the people that in this colourless life anything unexpectedly can happen. Anupam Kher told that this play is a documentary of his own life in which he has played more than 100 characters with lots of running around stories and also he has shared the moments of his own life. The principal theory of “Kuch bi ho Sakta hai” is applicable in any stage of life. As today, almost the whole nation is been sitting at their home due to the lockdown and fighting against an infectious virus i.e. Coronavirus. In regards to this, he told that he had never imagined that after working in lots of Hindi films, therefore, will end up his career by performing in an American TV show and will receive so much love from the audience for his acting. Similarly, he told his fans that,” Zindagi Mein, Kuch Bhi ho Sakta hai”.

The global actor is quite famous and known for his extraordinary accomplishments in the world of cinema. It has been observed that this versatile actor is known for experimenting with unique rule throughout his career. The main aim of launching this play is to spread the positivity in people’s lives and inspire them to remain calm during the unpredictable situations. We all know that this June 3 holds a very special place in his heart not only because he has launched his website, but also he began his career in the entertainment world so for him, it requires a double celebration. After completing his graduation from National School of drama, Anupam Kher on June 3, 1981, travelled to Mumbai to try his luck in the world of cinema. Now, today this actor is all set to put his best effort forward into the digital world with his website after starting his career and reaching the height of success. Anupam also mentioned that” he hopes from the audience that similarly they will show the same amount of love, appreciation and support, which they did throughout his career”.