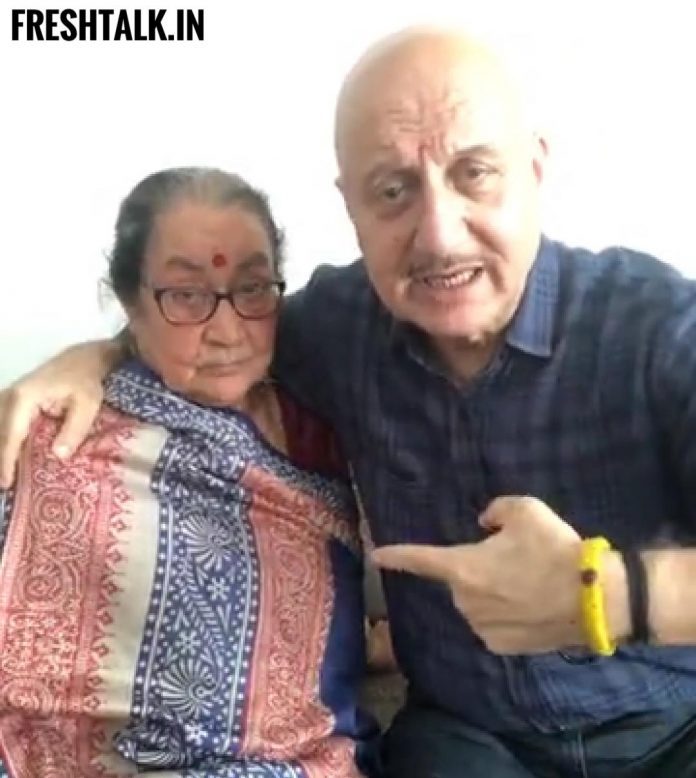 Veteran actor Anupam Kher who is very closely related to his mother Dulari has been seen often sharing videos of her mother on his social media platform. This time he shares a video of his mom Dulari Kher singing a Bollywood song. Lucky are those who get enough time to spend quality time with their family members at home and are making the most of it. Famous Bollywood actor i.e. Anupam Kher along with his brother i.e. Raju Kher was seen spending quality time together with their mother, Dulari Kher at their flat in Mumbai. It is been known that this legendary actor Anupam Kher is often seeing entertaining his fans with his hilarious pranks. It’s not about posting a meme by Anupam Kher along with his brother making fun about how Sunday and Monday look completely similar during this lockdown period or sharing the videos of their mother, Dulari Kher accompanying by dancing along with them.

Our generation has seen this legendary actor Anupam Kher is one of the finest actors who remain quite active on social media, therefore, posting positive videos for his fans and voices his opinions with pride. Apart from that, it has been seen that this actor has a massive fan of a young audience who are more interested in listening to his podcasts and opinions on several issues. It has been seen that Anupam Kher focuses on encouraging their fans by sharing the positive videos and a glimpse of his personal life since the outbreak of global pandemic COVID-19 which has engulfed the whole world and everybody is been sitting at their home.

Anupam Kher loves posting videos on the social media platform whether getting a hair cut from his brother Raju Kher or dancing with his mother and brother on the trending tune. Needless to say that, his fans get entertained after watching his hilarious videos posted by Anupam Kher on social media. This time he is back with another fun activity in which his mother was singing on a Bollywood song and this video reminds everybody about their mother. As this actor posted this video on his Instagram handle in which it was been depicted that the whole family was sitting at their dinner table wherein everyone was gently and persistently persuaded her to sing, after a little push from her sons, so she started singing in her cutest voice,” Mai tumhi se puchti hu mujhe Tumse Pyar kyu hai, Kabhi tum daga na doge aitbaar kya Karu”.

After listening to Dulari Kher, both her sons i.e. Anupam Kher and Raju Kher started teasing her that she sang this song for their father, therefore, creating an environment of laughter. Then, Anupam Kher took this video to his Instagram handle along with a caption which is,” Dulari Sings. I have not heard Mom singing for a long, long time. I had forgotten that she could sing. But she surprised us all. Don’t go by the lyrics. She changed them to suit her mood. Especially the last song. Enjoy the spirit and of her singing. #DulariRocks”. This is not the first time Dulari Kher has been seen singing. A few days ago, Anupam Kher had posted a video in which both the sons were dancing along with their mother on the trending tune and this video has rapidly gained the great popularity by the fans of Anupam Kher. After seeing his mother so much excited and happy, this veteran actor posted a message for his fans on the social media platform,” It is the responsibility of every child to make their parents happy because in return the only thing every parent wishes for their child is their happiness”.

Anupam Kher tells his fans to ‘Learn To Ignore’ the negatives, Watch the video here