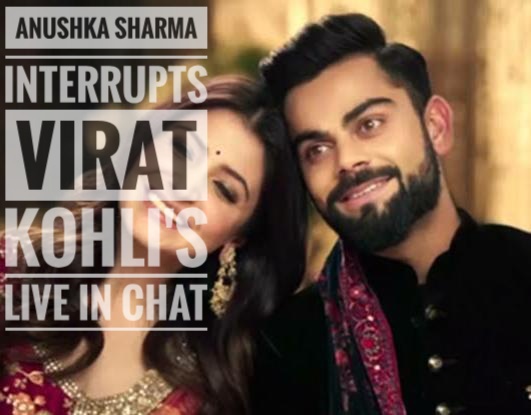 Since day one of the lockdown this beautiful pair of husband and wife is giving their fans major couple goals . From sharing their couple pictures in Instagram to sharing the video of being the former’s hairstylist.
This couple is taking full advantage of being in quarantine and cherishing and making special moments with one another.

As we all know Anushka Sharma’s jolly nature has always been adored by her hubby and her lovely fans and on the other hand Virat Kohli has always seen in a serious mood.
Anushka was always open about her relationship with Virat . In many talk shows and interviews she had accepted the fact of them being in a relationship but Virat never spoke about it ever.
When these two adorable souls tied the knot with one another in Italy it made their fans go gaga over them.

Their fairy-tale wedding and their goals after their wedding has caught everyone’s eyes. Previously Virat shared a video on Twitter in which Anushka was styling his hair . That video after being uploaded soon got viral and made this couple come in the limelight again.

Currently Virat Kohli was going live on Instagram with Kevin Pieterson. They both were talking about how they had together spent their “buddy days” and were talking about their good old days of on and off the field. Many of their fans joined their live session and were showing love to them by sending heart emoticons and by sending messages full of love and blessings . Virat told Kevin during the chat session that it was his first-class cricket coach who nicknamed him ‘Chiku’. “I got this nickname from a coach in the Ranji Trophy.” “ I used to have big cheeks then. In 2007, I thought I was losing hair. I got my hair cropped and my cheeks and ears stood out.”

“I got the name from a cartoon character. The rabbit in the comic book Champak,”. He further added that MS Dhoni has made his nickname famous. “MS has sort of made my nickname famous from behind the stumps. In the stumps’ mic, people pick up.”
The pair of best friends were having a good time together And were having a chit chat when suddenly a text of Anushka Sharma popped up in the live session , she in the message wrote that “CHALO CHALO DINNER TIME “.

This created an awww moment for their fans . After seeing the text Virat blushed a little and then Kevin shared the screenshot of the video in which anushka’s text was there .
Also Kevin gave a hilarious caption to his post that read, “When the BOSS said time was up, time was up! @anushkasharma @virat.kohli Hope you all enjoyed that? Just two dudes hanging out.”

This showed who is the boss of the house ! We hope Anushka and Virat enjoyed their dinner after that.
This couple is giving us #couplegoals in this quarantine period and lockdown because of the deadly Corona virus.
We hope they keep us giving more couple goals in the coming couple of days because we and their fans surely want to see what they are up to and how are they spending their quality time with one another.
Virat and Anushka have always been in the limelight of the B-Town and even when there is no social elite activities are going this couple is still maintaining their spot in everyone’s eyes .

To get more updates about your lovely celebs keep reading our blogs by visiting our FRESH TALK OFFICIAL!

IPL 2020- MI vs CSK, teams and fans gear up for the first match of the season

Twitterati remembers Yuvraj Singh’s iconic performance of 6 sixes in an over, check here