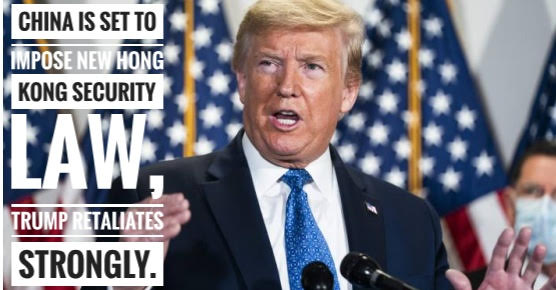 China is set to impose a new Hong Kong security law. On Thursday US President Donald Trump said that the US would react strongly if China follows through on plans to impose new national security legislation on Hong Kong after last year’s often violent pro-democracy unrest.

The law, which is predicted to ban sedition, secession and subversion of the central government in Beijing, are going to be introduced through a rarely used constitutional method that would effectively bypass Hong Kong’s legislature.

On Thursday the national people’s congress confirmed to pass a bill establishing that – an enforcement mechanism for ensuring national safety for Hong Kong, without providing details.

The law was expected to pass china’s parliament stamp before the end of its annual session on May 28, it delayed because of the coronavirus outbreak.

The US had previously issued a warning to Beijing as the law, which could enable crackdowns on anti-government protests, is blasted as the ‘end’ of Hong Kong as it could be the biggest blow to the city’s autonomy and civil liberties since its handover to Chinese rule in 1997.