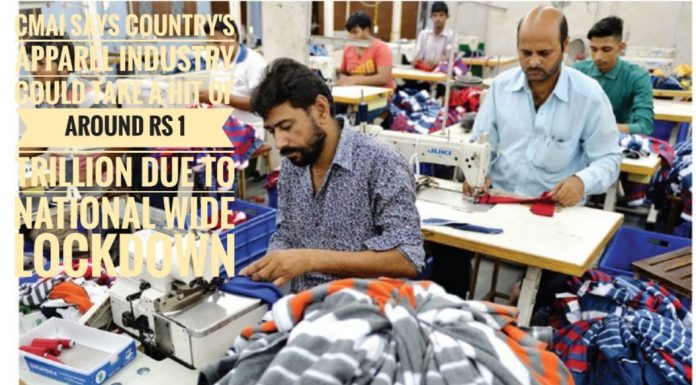 As all industrial sectors have halted all manufacturing activities and prep themselves to face the economic recession that is anticipated to follow the COVID-19 pandemic, the Clothing Manufacturers Association of India (CMAI) has announced that a huge loss to the clothing sector is to be expected due to the lockdown and sudden stagnation of productive activities. Further, the lockdown in China would adversely affect the Indian garment sector as India got most of its raw material from China. Due to this, the CMAI expects a loss of Rs 1 Lakh Crore to affect the garment market.

The CMAI conducted a survey amongst its members to analyze the situation and economic effects they would be facing upon the end of the lockdown.
The analysis of the first 1500 responses highlighted the major crisis that would follow which could only be handled with a support package from the Government to aid the sector to recover from the recession.

The members of the Micro, Small, and Medium Enterprises (MSME), which accounts for 90 percent of the industry would require the most support during this crucial time. The survey also indicated that there could be a massive drop in demand of at least 40 percent which could result in the industries cutting off employees, 80 percent of the members might have to down-size immediately with almost a 20 percent cut in pay of employees.

The members maintained a hopeful tone where almost 75 percent of them expected normalcy in the market in 2021-22. The CMAI has sought a 50 percent wage subsidy for at least a period of 5 months. Along with this, it has also proposed a provident fund and ESIC contribution to be done by the government for 3 months for those with a lower income. It also asked for all banks to offer an interest subvention of 5 percent on total borrowing and 25 percent additional working capital.

Members also expect a 30 percent to 40 percent increase in stock due to no sales and are worried about the collection of trade. Many fear debt and expect a minimum 90-day delay in collections. Almost 20 percent of owners fear to have to close down their business due to a lack of resources to pay for costs and restarting the sectoral economy.

Further, the issue of Chinese materials is a major concern to large manufacturing companies as they would now have to look for alternative sources from the supply of raw materials endangering the production and most probably increasing costs of the companies, including local production and sourcing.

As this industry depends largely on raw materials and machines, it is expected to be hit the most in light of the lockdowns all over the world. Further, there would be a huge impact on exports and imports of finished or semi-finished goods.

However, this also means that big foreign brands would look to cheaper countries such as India for their exports of raw materials. Thus, the association has pointed out that there can be a positive impact on India as well. During the month of January, buyers from Europe and the USA generally travel to China to negotiate with garment exporters for the next season. However, due to the coronavirus scare, most of the buyers are looking at alternatives. India scores ahead as it has a complete supply chain but the flip side of this is that Indian garment manufacturers neither have the scale nor the cost competitiveness to present themselves as a credible alternative.

Though this pandemic threatens the collapse of the garment industry to a point of no recovery, many believe the positive impacts will help to revive the industry from the expected loss of investments and regain manufacturing and production activities and ventures. The CMAI is hopeful that the MSME Package would help the current status of the industry and has appealed to the government to provide an appropriate package to cushion the effects.