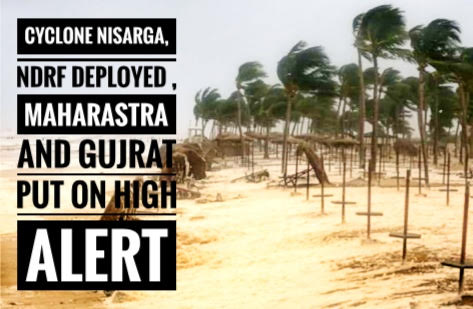 All the neighbouring districts of Mumbai have been placed at high-risk alert as the Cyclone Nisarga is expected to hit the western coast and more likely to affect Maharastra and Gujrat.

The Cyclone is said to reach the places by June 3.

It has been informed by the Indian meteorological department that depression has begun to form in the east-central Arabian Sea that is likely to develop into a deeper one and transform into a cyclone.

The studies show that the Nisarga cyclone will hit the coast and move over Gujrat and Maharastra by June 3. People living in the states and the neighbouring districts have been alerted by the governments.

Home minister Amit shah had a conversation with the CM of Maharashtra Udhhav Thackery about the situation and to look over the preparation of the state.according to CMO, 31 teams of NDRF have bee deployed already in both states.

The depression over the sea is said to intensify the tropical storm. According to IMD, it will move northwards and them shift to northeast thus moving over the Maharashtra and Gujrat in the next 6 hours and Daman in the afternoon of June 3.

The director-general SN Pradhan said in a statement that the tropical cyclone is an intense one and the teams deployed are expecting the wind speed to be near 90-100kmph. As a precautionary measure, the teams have begun to evacuate people from the coast of both the
states and bring them to a safer place. The district collectors have been asked to ensure no life is lost in the storm and the fisherman who went in the sea for their job, have been asked to return as soon as possible.

There are certain measures that will be taken by the team of NDRF that will be ensuring no the power supply is cut when there are people battling from the COVID 19 crisis already and undergoing treatment.

CM of Gujrat, Vijay Rupani held a meeting with the concerned officials to discuss the measures that will be taken to handle the cyclone along with the outbreak of covid virus. It was said by CM that the wind speed of the cyclone is between 90-100 kmph and expectancy of heavy rain across places like surat, Daman, Valsad, Baruch, Dang and Navsari in south Gujrat and Bhavnagar and Amreli in the coastal region.

A control room to monitor the situation of the cyclone as already been set up in Gandhinagar,10 teams of NDRF and 5 teams of SDRF have been deployed to aid the people and to handle the situation. The hospitals treating the patients of coronavirus are asked to have an adequate power supply to avoid power cut in the storm as any cost and they have been informed to treat the patients that will be suffering after the storm.

It is the first storm that will put an impact on the financial system of the country. It has been told by the weather department that the storm rise as high as 2 meters above the the astronomical tide will reach the coastal areas of Mumbai, Raigad, and thane districts during
the landfall.

The teams deployed have been given proper instructions and the fisherman has been asked to come back from the sea as well. Hospitals are asked to have power supply adequately to avoid cut in the situation when the world and the economy of the country are already fighting
against the deadly virus that has claimed lots of lives.