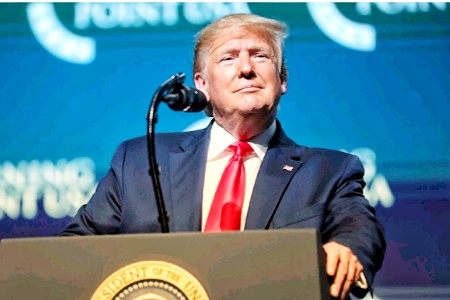 US President Donald Trump has announced that his administration is looking at banning the Chinese video app Tik Tok. The app is allegedly a security and censorship concern.

“We may be banning TikTok. We may be doing some other things. There a couple of options, but a lot of things are happening. So we’ll see what happens.” He announced to the media.

There have been various discussions happening in regards to this issue. Earlier, a talk on Microsoft buying the app was also discussed.

Tik Tok app has been a sensation all over the world since 2017 with its wide platform to discuss issues and have fun while engaging on its platform. Millions of users make videos and share it with the world. Various upcoming trends are also showcased here.

With reference to the ongoing rumours about the app, Tik tok released a statement saying “While we do not comment on rumours or speculation, we are confident in the long-term success of TikTok.”

The app was banned my the Indian government along with various other Chinese apps over security threats and disruption of user privacy amongst other problems.