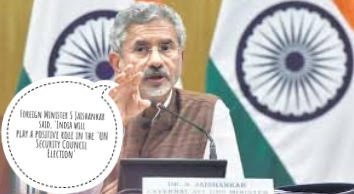 The Indian Government has announced that the country would play a ‘positive role’, especially when the World is assailed by several challenges including the COVID-19 pandemic. The country will contest in the election as a non-permanent member of the UNSC ( United Nations Security Council ).

As a non-permanent member, the country will not possess any veto powers.

Foreign Minister S Jaishankaran listed out the country’s priorities for the elections to UNSC on 17 June. Through which, the country will retake the seat at the council after almost a decade, in 2021-22, he said at an event in New Delhi.

“We have always been a voice of reason, a votary of international law. We advocate dialogue, consultations, and fairness in our approach to global issues and we emphasize global development, addressing climate change and eradicating poverty as central to the planet’s future,” he said.

He expressed his confidence that India will surely take a seat now in the high table, now that the “normal process of international governance has been under increasing strain as friction has increased.”

“Traditional and non-traditional security challenges continue to grow unchecked, terrorism is the most egregious of such examples,” he said, “Global institutions remain unreformed and under-represented. They are, therefore, less able to deliver.”

“The COVID 19 pandemic and grave economic repercussions will test the world like never before,” Jaishankar said, remarking that “In this extraordinary situation India can play a positive role.”

“We seek to move towards a new orientation for the reformed multilateral system,” besides responsible and inclusive solutions, “concrete and result-oriented action at the Security Council for an effective response to international terrorism” and “reformed multilateralism to reflect contemporary reality,” the minister said, emphasizing on the priorities of the country.

Also, he added, India was in favour of a ‘comprehensive approach to peace and security guided by dialogue, mutual respect and commitment to international law.

With its huge population and growing profile, India has been seeking a greater say in international rulemaking. But its efforts to ensure veto-wielding the UN Security Council to include itself and other nations have come to nought mainly due to opposition from China.