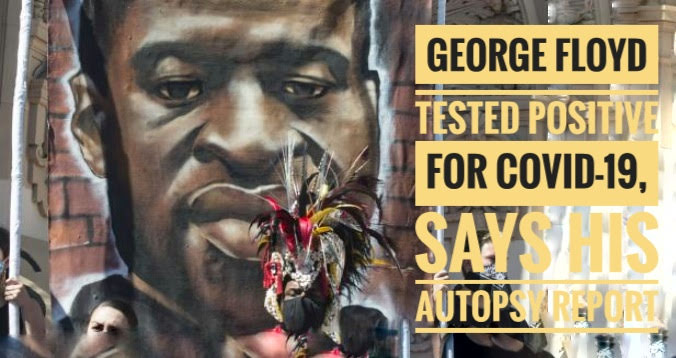 On Wednesday, the Hennepin County Medical Examiner’s Office has released the full autopsy report for George Floyd which shown that he had tested positive for the COVID-19 and was likely asymptomatic when he passed away last week while being detained by police in Minnesota.

In the 20-page report, the medical examiner stated that Floyd had tested corona positive on April 3 but appeared asymptomatic and after the coroner’s office disclosed the summary findings on Monday that Floyd had a heart attack while being restrained by officers, and categorised his May 25 death as a homicide.

As per the report, “Since PCR positivity for 2019-nCoV RNA can persist for weeks after the onset of clinical disease, the autopsy result most likely reflects asymptomatic but persistent PCR positivity from the previous infection.”

The report by Chief Medical Examiner Andrew Baker stated that the Minnesota Department of Health had swabbed Floyd’s nose after his death and he was tested corona positive, the NYT report said.

The report also stated that there is no portent that the virus had any role in his death.

Across the New York and the US protests have been intensified as thousands of demonstrators came to the streets demanding an end to police barbarity after Floyd was killed when a white police officer kneeled on his neck for around nine minutes while he lay handcuffed and pinned to the ground gasping for breath on May 25.

The last words by Floyd were “Please, I can’t breathe,” and have led people to protest and took on road for demanding action against police barbarity.

“The funeral director wasn’t told, and we weren’t told, and now a lot of people are running around trying to get tested,” Baden said.

“If you do the autopsy and it’s positive for the coronavirus, it’s usual to tell everyone who is going to be in touch with the body. There would have been more careful,” he said.

As per the Johns Hopkins University data, there are more than 1.8 million confirmed coronavirus cases in the US and death toll over 107,000.