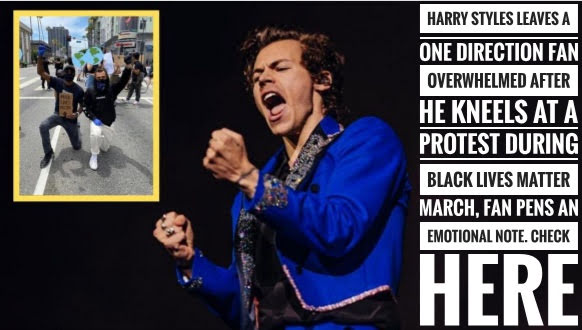 Former one-direction singer Harry Edward styles joined the group of the protestors in Los Angeles for the “Black lives matter” protesting by kneeling on the streets with his clenched hands raised in the air which signifies the sign of unity towards oppressed individuals. Death of the African-American George Floyd shook the whole world resulting in the protests happening all over America. Several Hollywood celebrities also participated in the rallies holding a placard which says, “Black Lives Matter”. On seeing the harry styles supporting the black lives matter movement, one of his black fan got overwhelmed and she penned down an emotional note praising him that, “she had attended the white crowds show many times and every time felt very uncomfortable at the concert because of the white crowds as she hated them on not seeing any other black fans around cheering along with her, but after seeing people like Harry styles seeking the justice for the Floyd, it seems to her that the Universe is shining its light upon her to be next to one of her favourite person”.

Edward styles even twitted that,” being racist is not enough, we must be anti-racist. I stand in harmony with all of those who are protesting. Look inside yourself, educate yourself and others. Enough is enough. Black lives matter”. He also requested his fans through the social media that,” if you can’t donate and protest then you must spread awareness among the other people”. Harry’s fan had a strong emotional effect on seeing him supporting the Black lives matter march and documented her feelings after continuously watching her idol holding a poster and kneeling in a silent protest on the streets.

Countless videos and photos showed the watermelon sugar singer stepped out on the road wearing a black full arm jacket and a pair of white jeans along with the gloves keeping in mind regarding the infectious virus i.e. Covid-19. Fan of this international pop star was seen marching along with him on the road. One of his fans who admire him a lot revealed that it was a very heartwarming scene to see him coming forward and showing his support towards the Black lives matter movement. Also, she stated that seeing Harry Edward styles protesting and asking for the justice make her feel that you are being supported, as earlier she used to feel very uneasy whenever she used to attend the concerts organized by the “whitewashed” people.

Even, this fan of harry styles twitted that she felt very happy as she has a perception that it is very ridiculous on being black but after watching harry styles her notion got cleared and wrote a sentimental note on twitter that, “harry styles is doing much better as he is shouting with the other protestors and even kneel on the ground asking to stop this anti-racism system”. During the Black lives matter movement, various protestors got arrested so harry styles has given the bail to them. Also, requested his fans through the social media platform to do the same thing. The whole incident of the brutal killing of George Floyd is being described on social media by Harry Styles. Since the death of Floyd, various protestors have broken out in solidarity with the African-American community all over the world. It’s been a remarkable movement for the fans of the harry styles on seeing him coming on the road and telling others to support the Black lives movement instead of sitting at the home. Apart from Harry styles, other Hollywood celebrities have come up on the road and joined this protest movement to stop this racism and the corrupt system.