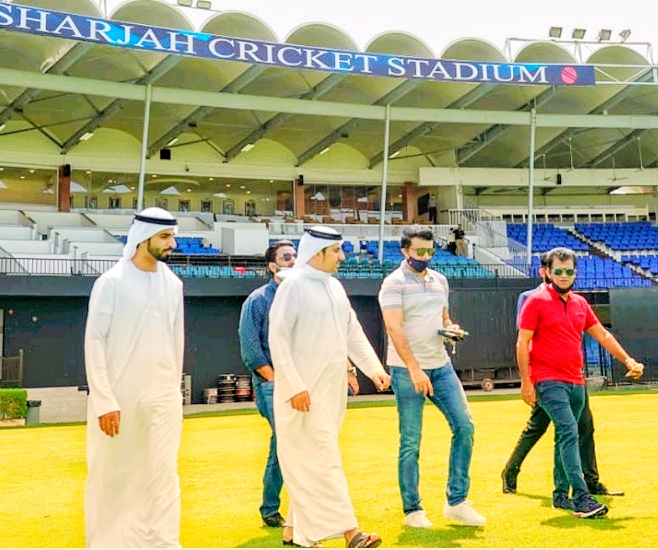 The President of Board of Control for Cricket in India (BCCI), Saurabh Ganguly, visited the Sharjah Stadium, one of the three venues to host the Indian Premier League (IPL) this year. He reviewed the preparations and praised the renovated stadium. The IPL 2020 is going to held in the UAE in view of the growing cases of Covid-19 in India and will be hosted by Dubai, Abu Dhabi and Sharjah.

According to the press release issued here on Monday, Ganguly said that the young players are eager to play in the cricket ground where great players like Sunil Gavaskar and Sachin Tendulkar created history. Recently a much renovation work has been completed at the Sharjah Stadium which includes installation of new artificial ceilings, upgrading of the Royal Suite along with that the preparation of the Commentary Box and Hospitality Box as per the rules related to Covid-19.

The IPL 2020 is being held in the UAE due to the Covid-19 pandemic. The tournament starts on 19 September and before that BCCI President and former Indian captain Sourav Ganguly visited the United Arab Emirates (UAE) grounds and took stock of the preparations. During this time, when Dada reached the famous Sharjah Cricket Stadium, there was something special in the picture there.

Sourav Ganguly is satisfied and happy with UAE’s preparations. The tournament is being held in the UAE for the second time before the initial phase of the IPL was played in the UAE even during the 2014 Lok Sabha elections. Just this time the entire tournament is to be played in the UAE. Meanwhile, Dada shared a picture of Social Media during Sharjah Stadium on his Instagram account.

Several BCCI officials including Saurav Ganguly and UAE officials are also present in this picture. At the same time, when Dada saw between the photos that there was a big poster of Pakistan players at the height of the stadium behind, he blurr it.

Sourav Ganguly wrote with his post and video, ‘Photo from the famous Sharjah Stadium which will host the IPL 2020. Tensions have been going on for a long time between India and Pakistan and Dada was also seen to ignore Pakistan through cricket.

IPL 2020- Commentary panel for the season has been announced, check here for the full list