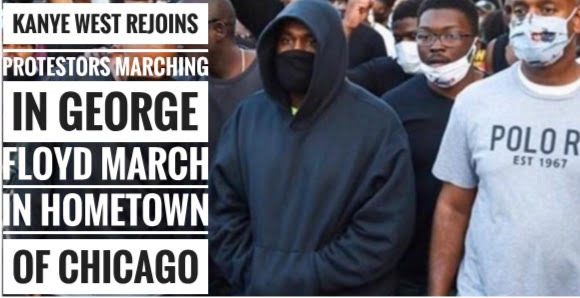 Kanye’s marching comes amid the protests in the US against the police brutality and system after the killing of George Floyd, an unarmed man who was killed by a white police officer after he pinned him to the ground with a knee on his neck. The officer in question, Derek Chauvin was earlier charged for third-degree murder and third-degree manslaughter charges but this was upgraded to second-degree murder on Wednesday. Formal criminal charges have been filed against the three police officers who were present there at the moment.

This is not the first time Kanye West has raised his voice for Floyd. Recently, he created a 529 college savings plan to fully cover tuition for Floyd’s 6-year-old daughter Gianna. He also donated $2 million to support the families of and the legal funds for Ahmaud Arbery and Breonna Taylor.

West Representatives say that he has also donated for the black-owned business in crisis in Chicago and nationwide.