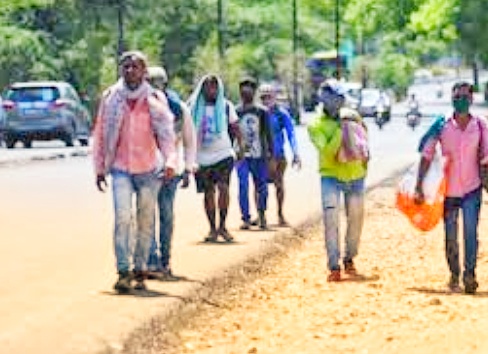 In a meeting scheduled for 7 August, lawmakers will take up the ₹20 lakh crore package
announced by the Centre, the housing scheme for financially weaker sections both in the
urban and rural areas, and other schemes announced for the poor.
The meeting will be held in two rounds, with representatives of ministries of urban
development, rural development, skill development and entrepreneurship and consumer
affairs, and food and public distribution, in attendance.
The parliamentary panel on labour will examine the decisions taken by the National
Democratic Alliance (NDA) government aimed at helping migrant workers who had to leave
for their native places because of lack of jobs in urban centres following the pandemic.
The Centre had announced free distribution of food grains and pulses to 8 crore migrant
labourers not covered under the National Food Security Act or the public distribution scheme
(PDS) at 5kg per person, per month for two months, which was later extended. It had also
announced an affordable housing scheme, expected to benefit about 300,000 workers
initially, according to the Ministry of Housing and Urban Affairs.
“We want to understand the decisions of the union government and the preparedness of
each ministry after the announcement was made by Prime Minister Narendra Modi. We want
to understand the Garib Kalyan Yojana scheme and also the progress of housing for the
poor in cities and rural areas,” said a senior member of the committee.