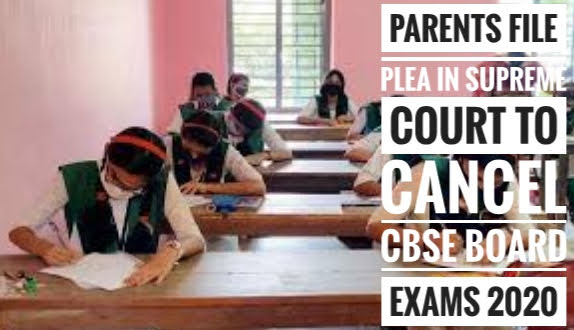 Due to the pandemic world has already lost many things. It has made a lot of changes due to which people are not able to cope with the situation any more. Every day 1000s of people are diagnosed with covid-19. The cases are just increasing day by day In the recent CBSE news, a new issue has emerged as a group of four parents have registered a petition demanding the Supreme Court to cancel the CBSE board exams 2020 because of the rising cases of covid-19 in the whole country.

Parents, Col (Retd) Amit Bathla, Poonam Singla, Charu Singh and Sunitha all of them are Delhi residents filed a petition on Tuesday, June 9 through advocate Rishi Malhotra demanding the apex court to quash the CBSE board exams which could put every student lives at danger across India.

India now has more than 309k confirmed coronavirus cases and by the time CBSE intends to hold the board exams from July 1 to July 15, the numbers will increase beyond the limits.

As CBSE board exams are set to be held in all over India across 15k exam centres, this could put students at very high risk and can also turn them into coronavirus carriers even if they don’t appear the symptoms of covid-19 immediately.

The petition states that since the CBSE board exams were already cancelled for the 250-off schools abroad and students were set to be evaluated on the basis of internal assessment and practical exams which had already been conducted, why couldn’t the same be applied to the schools in India this year?

The petition notes how sad it is that respondents weren’t concerned about the fate of such a decision on the students who are in India now.

The Advocate Rishi Malhotra reportedly mentions that many colleges and state boards had already taken the decision to cancel exams due to safety issues and CBSE should also think about doing the same in this case.

The petition also mentioned that as most Covid-19 cases are initially symptomless, the children appearing for the CBSE exams could turn into carriers and then start infecting other people.

Many universities and major institutes such as Delhi University and the IITs have cancelled their exams due to this reason; state boards such as that of Chhattisgarh have also done the same.

It’s not at all possible and practical to bear the heat during the summer seasons, mainly in the month of July where the temperature could easily rise till 45 degrees. In this scorching heat, it is a painful task to give exams wearing masks and gloves.

According to the live law, the petition also said that it would be a painful task for students to sit for almost four hours in an exam hall in July with gloves and masks when the temperature would be around 45 degrees in many places in India.

The petition also added that since CBSE increased the number of exam centers from 3000 to 15000 so that social distancing could be maintained, keeping a track of safety guidelines in so many centres would be a difficult exercise to follow.

In response to the petition, CBSE has made some safety measure against Covid-19, the CBSE exams would be conducted in the students’ home schools so students can easily give the exams nearby their home and they could avoid long-distance travelling.

Also on June 2, CBSE released a notification to let the students know about how they could change their CBSE exam centres and the eligibility criteria to do so since many students were living in areas which are under a lockdown or in a containment zone in which case no CBSE exam centre would be present.

The new CBSE board exam 2020 datasheets for classes 10 and 12 had been released on May 18 and students are going ahead with the preparations, especially from the CBSE Online website which holds free PDFs for sample papers and study material for mainly classes 9 to 12.

Now we have to wait for the Supreme Court for the final decision.