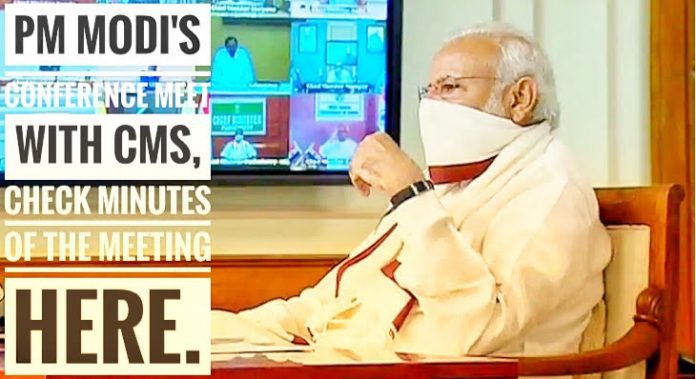 The number of confirmed cases in India have sky-rocketed to 27,892 in a matter of days and Ahemdabad has emerged as a very alarming hotspot showing evidence of community spread and transmission. As India enters Day 13 of Phase 2 of the national lockdown imposed by the government to prevent further transmission, Prime Minister Narendra Modi conducted a video conference with the Chief Ministers of respective states. Many speculated that this meeting would be centred around the exit strategy that will be followed post-May 3rd. This was the fourth video conference between the Chief Ministers and the Prime Minister to discuss the current on-going situation. The meeting started at 11 am.

“Prime Minister during the conference”

During his meeting, the Prime Minister lauded the joint efforts of the chief ministers to ensure lockdown measures are followed and added that the lockdown has been helpful to tackle the deadly spread of coronavirus. He also continued to emphasize the importance of practising social distancing and wearing masks. He urged the states to promote the Arogya Setu app as many cases of the flu are being reported in North Indian states and they have the potential of being the novel virus.

The chief ministers from Meghalaya, Mizoram, Puducherry, Uttarakhand, Himachal Pradesh, Odisha, Bihar, Gujarat, and Haryana spoke about further strategies to fight against deadly coronavirus. Meghalaya and Odisha urged Prime Minister Narendra Modi to extend the lockdown with some additional riders. From lockdown strategy to start economic activities in the states.

The state of Meghalaya stated that it plans to extend the lockdown in the state past May 3. “We have mooted to continue with the lockdown post-May 3 with relaxation on activities in green zones or non-COVID affected districts in Meghalaya,” said Conrad Sangam, the Chief Minister of Meghalaya.

The Chief Minister of Uttrakhand stated that for the revival of the states during the lockdown, a committee of ministers and a committee of experts has been formed to tackle the situation.

The Chief Minister of Gujarat, Vijay Rupani advised that the centre should take a decision in favour of extending the lockdown and that Gujarat will strictly abide by this decision.
The Cm of Himachal Pradesh Jai Ram Thakur stated that his government has reached out to the people of the state through their Anganwadi centres to create awareness and sensitization.

The state is also testing people with symptoms due to the increasing number of cases in
bordering states, even though 12 districts in Himachal have had no positive cases. “We are now in a position to start economic activities; however, lockdown should continue considering the issue with other states as well.” he further added regarding the economic situation.

The CM of Odisha Naveen Patnaik stated that all public gatherings, religious, and educational institutions need to be completely stopped. He also pushed for adopting measures to kickstart the economy from this period of stagnation. For this, he suggested that the Niti Ayog should provide ideas and strategies to ensure that the economy continues to function throughout this period and that economic activities should be allowed within the states if there is a Phase three of the lockdown.

As part of the state initiative, the Bihar CM Nitish Kumar stated that they had begun
door-to-door screening and that almost 4 crore people had been screened till now.
During the video conference, Bengal CM Mamta Banarjee promised to help the students from West Bengal who were stuck in Kota.

“I am personally overseeing this & we will leave no stone unturned in ensuring that everyone gets any possible help,” she added.
The state of Puducherry has witnessed a shortage of Personal Protective Equipment and has asked for the centre’s intervention for providing them as well as other medical supplies.

In response to the staggering exit strategy being proposed, the CM of Delhi Arvind Kejriwal stated that it will not be easy to end the lockdown so suddenly.
During the conference, some ministers have also pushed for special train services to be
provided to transport the poor migrant worker population to their own states.

However, due to the time constraints, only nine ministers could speak during the video
conference including Meghalaya, Mizoram, Puducherry, Uttrakhand, Himachal Pradesh, Bihar, Odisha, Gujarat, and Harayana. The video conference ended at 1 pm. At least chief ministers of four states have advocated for an extension of the coronavirus after May 3 to further tackle the spread of novel coronavirus. Meanwhile, the centre has put in place several relaxations as it allowed certain non-essential shops to be opened in residential areas which have witnessed no to very few cases.