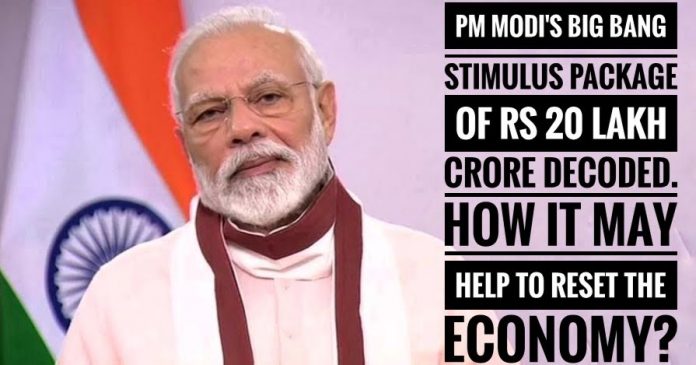 On 13th May, Narendra Modi announced the upcoming lockdown 4.0 after 17th May. Thus time, there is an interesting act added with the upcoming 4.0 lockdown. An ‘economic package’ for the people of India to revive what has been lost; India’s economic growth.
Under the name ‘Atmanirbhar Bharat Abhiyan’ (literally, self-reliant India campaign), the total amount of the package would be Rs. 20 lakh crore. He stated that the package will benefit labourers, farmers, honest taxpayers, MSMEs and cottage industries, equals to 10 per cent of India’s GDP. This package will break the records of any package used by any other country to curb the degrading economy due to the Coronavirus. This equals up to about 10% of the GDP. The package details will be announced by finance minister Nirmala Sitharaman on Wednesday.

“The package will have an emphasis on land, labour, liquidity and laws, and will pave the way for a self-reliant India,” PM Modi said. “This package is for that worker in the country, that farmer, who is working hard day and night; for the Indian middle class, for the industry which is committed to making India stronger.”

Modi said the package will carry the previous steps announced by the Reserve Bank of India, along with the measures by the government to fight Covid-19 in March. The plan is to make Indian products competitive. Modi said the self-reliant strategy will depend on five pillars—growing a new economy, creating state-of-the-art infrastructure, setting up technology-based delivery systems, leveraging the young demography and exploiting domestic demand.

“We will have to have an economy which will not bring incremental change but quantum jump, infrastructure that will become the identity of modern India, and a strong supply chain…” he said. “These reforms include supply chain reforms for agriculture, rational tax system, simple and clear laws, capable human resource and a strong financial system. These reforms will promote business, attract investment, and further strengthen Make in India”.

Further pointers for the coming lockdown would be given out soon by him.