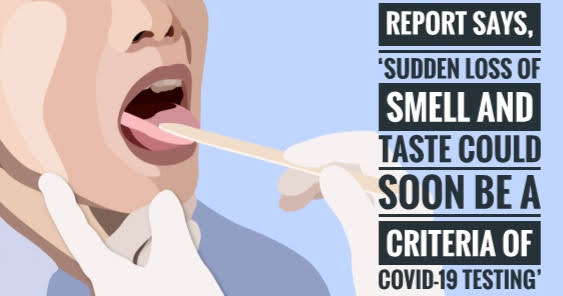 A medical advisory report says that a sudden loss of smell and taste could soon be criteria of Covid-19 testing. Currently, only people with specific symptoms like throat pain, fever, body ache, diarrhoea, chest pain, vomiting and cough can be tested.

Coronavirus has put the world in grave danger. It has a range of symptoms, ranging from some being more common than the others. Most common symptoms include cough, fever, tiredness while less common ones are that of loss of taste or smell, aches and pain, shortness of breath and even chest pain. However, doctors have said that the timing of onset of symptoms may be varied. While some may describe the loss of smell and taste as their initial symptom, many may develop it gradually.

Chief Minister of Delhi, Arvind Kejriwal had recently commented that people with asymptomatic symptoms should not go and get tested as the system might break from getting so many people tested. He said with such an increase in the number of confirmed cases, they make it a priority to resolve issues of those who face symptoms. However, this policy is considered dangerous as these people may be spreading the virus silently. The Delhi government, dealing with an enormous number of patients have also brought in a change in their discharge system in order to accommodate new patients coming up every day. They have now formalised the decision that patients that cure their symptoms may not need a second test before getting discharged.

There are about 3 lakhs + cases in the country out of which 1.5 lakh have recovered. Maharashtra stands with the highest number of cases by reaching almost a lakh. Delhi has about 34,000+ cases with 12,000+ recoveries and about 1000 deaths. Reports also show that there might be a community spread happening around. An official notice on the same is yet to come.