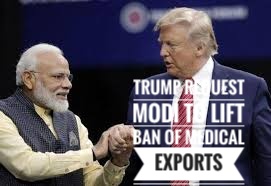 Hydroxychloroquine is a malaria drug which scientists believe could be used to treat Corona Virus. India’s prime minister Narendra Modi following a phone call with the president of the United States of America Donald Trump considered lifting the ban on the drug. President Trump described the drug as a game changer. Scientists are not yet sure about the effectiveness of hydroxychloquine on Covid-19 but Pharmacies all over the world are reporting a high demands for the drug. President Trump said that India is holding up export because of domestic needs. President Trump also added that he might take chloroquine although it will only be on doctors orders. The U.S. currently has the highest number of cases in the world and its death told currently exceeded 5,0000. The U.S. needs chloroquine to treat the Corona virus patients in the country.

Although India banned the export of Chloroquine , after the phone call with President Trump, India’s prime minister is really considering lifting the ban as India produces the drug in large quantities. Researches believe the drug could work as anti-viral drug. India currently depends on China for the Active Pharmaceutical Ingredients used in making Chloroquine . About one hundred companies have the capability of making the drug but depend on China for sources.

Chloroquine is currently experimented by countries all over the world to prove it’s effiency on Corona virus. In 1934 Hans Andersag discovered the drug at Bayer laboratories but it was not used for fear of being toxic to human beings. Experts have warned against the use of the drug and its effectiveness. Currently more than 9,600 people have died in the U.S. Questions concerning the sudden change were not responded to. White house trade adviser Peter Navarro said 29 million tablets of chloroquine were in the warehouse.
“I said I would appreciate it if they would release the amounts that we ordered” President Trump said. Johns Hopkins University reports more than 312,000 cases of Corona virus with more than 8,000 deaths.