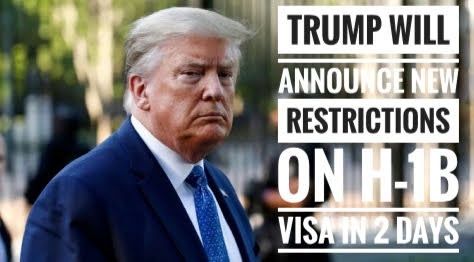 US president Donald Trump is supposedly bringing an order suspending H1B, L1 and other work visas by the end of the year.

He is supposed to have a meeting at his base and announce the details. The order, however, will not affect anyone who is already in the country.

Such a decision has been severely criticised by the Technology industry workers citing that it would hurt the economy badly if the inflow of foreigners stop. Various Indians working in this sector now face panic and fear about what will come next.

Trump has defended his order by saying that such a move will help unemployed Americans amid devastation created by the coronavirus pandemic. However, he also said that there will be certain exceptions to the order.

Earlier, he had put a block on foreigners getting permanent residence in the United States. These moves can be looked at in a political sense by looking at his supporters in the United States who turn to support this decision. Such a move may help him gain support amid election.

Recently, Former national security advisor Mr John Bolton who was fired by Trump citing personal differences came forward and leaked information about how Trump sought the help of the Chinese President Xi Jinping by providing half to certain investigations to help “dictators he liked”. In February, Trump was also accused of putting off military aid to put pressure on the Ukrainian President to leak damaging information against his election opponent, Joe Biden.

The elections are to be held in November,2020.

Trump said, ‘The US is making strong headway in respect to Covid-19 vaccines’