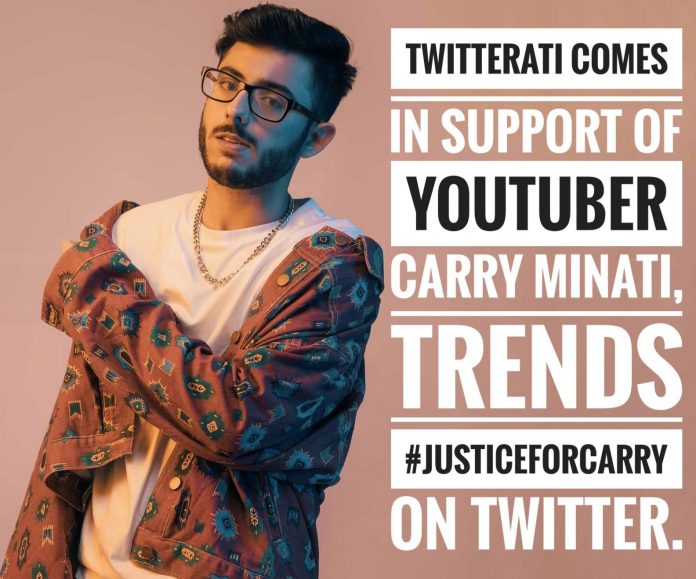 CarryMinati’s YouTube vs TikTok video got viral with the speed of storm on the internet. The video was deleted today by YouTube as a violation of terms of services being the reason. Carri Minati has millions on followers and has a strong fan base who came in support of Carryminati and showed their anger against the deletion of video.

The video YouTube vs TikTok was uploaded a few days back in last week. The video got deleted today by YouTube due to violation of rules. Now his fans are showing anger over the act and the hashtags such as ‘Justice for Carryminati’ and ‘Bring back Carry’s video’ is trending on twitter in support of Carryminati.

Social media is a platform where things get viral within seconds. Hence it should be used carefully. As we all know that last week Carry released a video in which he targeted the TikToker Amir Siddiqui. The video was released on CarryMinatis official channel. He bashed the TikTok.

“We will not tolerate harassment” is already mentioned in YouTubes harassment policy which was updated in December 2019. Carry Minati’s video was directly targetting the TikTokers. The video targeted the TikTokers, the social influencer Amir Siddiqui dismantling Siddiqui’s video line-by-line.

As the YouTube deleted the video fans expressed their extreme anger and demanded the video of their favourite YouTuber back.
“#justiceforcarry There are many wrong things on youtube but youtube never Take down these videos and if these videos are not violating the community guidelines then how does carry video violating what we called the youtube community guidelines we need justice.” wrote by one user.

Ashish Chanchalani vs Bhuvan Bam vs CarryMinati, who has most youtube Income?