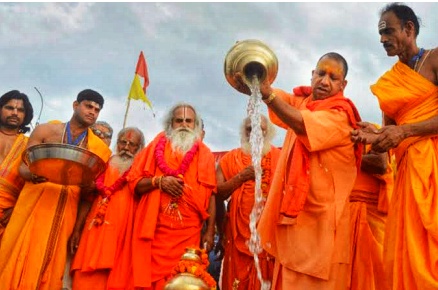 Chief Minister Yogi Adityanath arrived in Ayodhya today to review preparations for the ‘Bhoomi Poonam’ which is a three-day ritual that will begin from August 5th.

Prime Minister Narendra Modi will be present for the event and will lay the foundation stone.

He is expected to meet the official with regards to the preparation for the groundbreaking ceremony which will be telecasted on TV so that viewers all over the country can watch it. Various video cameras have been installed on the site for the same. About 150-200 people are expected to attend the ceremony, although an official list is yet to be confirmed.

On 25th July afternoon, he offered his prayers at the Ram Janmabhoomi site upon his arrival. He took part in puja and placed the murti for Laxman, Bharat and Shatrughan as well.

The ceremony on August 5th will lay a 40kg silver brick to inaugurate the site. The construction is expected to be complete by 2023.

Various changes to the original design of the temple have been notices. The height of the temple has been increased by 20 ft. from its original blueprint. Two mandalas have also been added.

The ceremony will follow strict social distancing norms and other rules for the safety of the attendees.