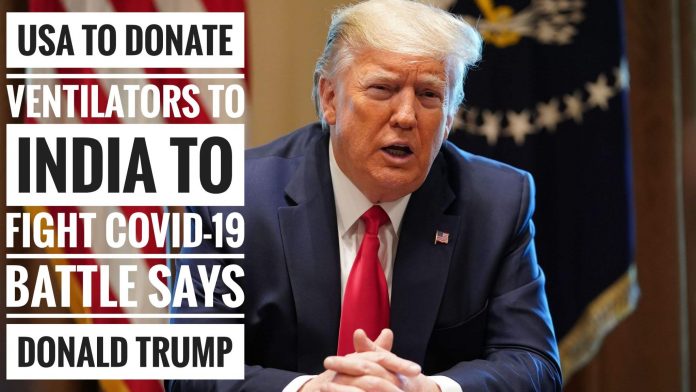 President Donald Trump of the United States of America announced that the US will be donating ventilators to India to help the country in their fight against Covid-19. The president made this announcement through a tweet on his twitter account on Saturday.

In his tweet the president “I am proud to announce that the US will donate ventilators to our friends in India. We stand with India and @narendramodi during this pandemic. We’re also cooperating on vaccine development. Together we will beat the invisible enemy”.

Last month, at the request of Mr Trump India, had allowed the export of 50 million Hydroxychloroquine tablets for the treatment of an infected person’s by the virus in the U.S. ever since the coronavirus originated in December last year, it has so far claimed 307,666 lives and infected more than 4.5 million people worldwide.

Mr Trump also praised India and their prime minister. “India has been so great and as you recognize your prime minister has been a really good friend of mine. I just came to a brief while ago from India and that we are considerably together”. He also stressed that India and America were working together to find a vaccine. India just like many other countries needs ventilators to help in their fight against coronavirus. The U.S. has been the worst-hit country so far with over 1.4 million infections and 87,530 deaths.