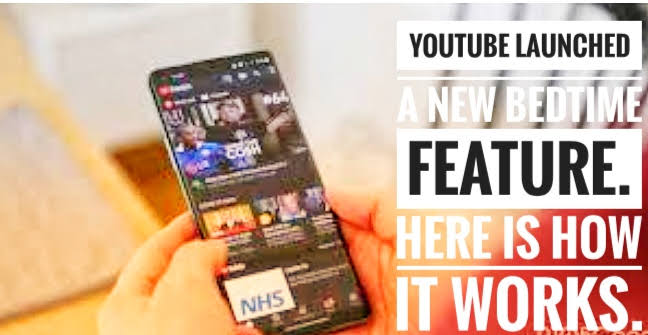 The company has started to roll out more digital well-being features and a new update to all its users. The new feature is named ‘Bedtime Reminders. The company has stated that this feature is a part of youtube wellness and screen time reminder that was launched back in 2018.

This feature will be added to the list of features that will help the users to be more responsible with google products. By using this feature the viewers will be able to set a reminder of when to stop watching videos and go to bed. The blog of the company says, “you set the start and end time in your settings including whether or not you want to prompt to interrupt a video or wait till the video finishes. You will also be able to dismiss or snooze the reminder”.

The new feature launched by Youtube has been made available for both IOS and Android. the feature will be updated to the users soon and has been rolled out to use.google has sent over 3 billion messages asking the viewers to “take a break” Under the digital well-being
feature in the span of the last two years.

Needless to say that the pandemic of COVID 19 has made an increment in the viewership but also has increased the screentime for a lot of users who are forced to stay at home to prevent the spread of the pandemic.

The viewing of news channels and full-length movies has made a much higher jump in the time being.

As stated by the Media giant the platform’s on TV has touched the peaks as the hours watched have increased to a significant rate of 80% in March as compared to the watch horse of the same period last year.

CarryMinati comes up with his most awaited video ‘YALGAAR’ after the controversial removal of his last video. Check how fans and netizens are...

CarryMinati thanks everyone for 20 million on YouTube, and announces his new video YALGAAR will be out soon. Check here for the story.

YouTuber Bhuvan Bam is not leaving any stone unturned for helping the needy amid crisis. Check here for the story.