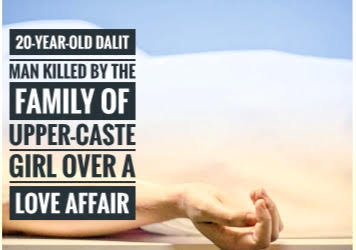 A 20-year-old youth Viraj Vilas Jagtap, who had fallen in love with an upper-caste girl, in Maharashtra was murdered on 7 June. An FIR was registered by Viraj’s uncle Jitesh Vasant, over six people reported as accused. Jitesh Vasant is a resident of the Jagtap Nagar area of Pimple Saudagar in Pune.

The Kate family belongs to the so-called upper-caste Maratha community, while the Jagtaps belong to the Dalit community. Also, it is reported that he was racially abused before being struck to death. The girl’s family had accused Viraj of stalking and harassing her. They blamed Viraj for troubling her, in spite of the warnings they have given Viraj. Viraj was a second-year Arts student at a local college. Also, he
was working part-time in the transport business.

As reported, Viraj was on his bike at around 9:30 pm. He was chased by six persons in a tempo. The tempo hit Viraj when he fell down and started running. They followed Viraj further. One of the accused hit Viraj on the head with a metal rod, while another threw a rock, and he dropped to the ground. Four of the accused held his hands and legs. Jagdish spat at Viraj for being in a relationship with his daughter and made casteist curses. Then they attacked Viraj with metal rods and rocks.

By the time Viraj’s uncle got to the scene, he lay on the ground in blood-soaked trousers, with several injuries all over the body. As he was still conscious, they rushed Viraj to Aditya Birla Hospital. Viraj explained to his uncle what happened in the meantime. However, Viraj was declared to be dead on Monday morning (the next day).

Viraj is survived by only his mother, his father passed away whr=en he was just a year old. Jagtap displayed hope that the Police carry out an unbiased investigation and bring justice to the deceased. Inspector Ajay Bhosale, Sangvi police station, said, “The accused have been booked for murder, unlawful assembly and also under relevant sections of SC/ST Act. They have alleged that Viraj was stalking and harassing the girl and had been warned before. On the night of the incident, they had an argument followed by a fight. We will also speak to the girl to know her side of things.”