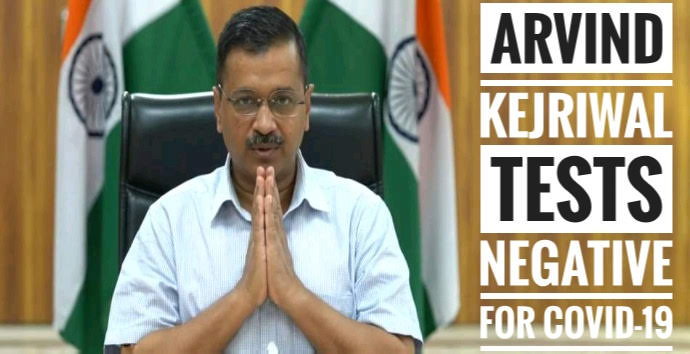 The chief minister of Delhi, Arvind Kejriwal, has tested negative for coronavirus. This report comes after news that he had a sore throat and fever on Sunday, which are symptoms of COVID-19. He was advised to undergo the COVID-19 test on 9th June, where he tested negative.

He had attended a cabinet meeting on Sunday and then decided to go into self-quarantine due to feeling unwell. The news of his test coming out negative brings relief to the state that was majorly worried about the consequences it would have faced in case the test came positive. Various politicians like Mamata Banerjee, Adesh Kumar Gupta, and Shiv Sena leader Priyanka Chaturvedi and many more wished Kejriwal for a fast recovery. His fever has now gone down and he is feeling better. He will resume work soon.

Currently, the Delhi government is yet to decide their future actions to curb the spread of Coronavirus. Recently, the Lt Governor Anil Baijal, who is also the chairman of Delhi Disaster Management Authority, overruled the decision of reserving beds in state-run hospitals for residents of Delhi and even said that people without proper symptoms and old age patients will be tested. He also called for an all-party meeting to discuss the condition of the state. Many AAP members alleged that this decision was taken under pressure from the BJP. Arvind Kejriwal soon tweeted that such a decision would cause problems for the state since more and more cases are being reported every day, causing stress on how they would accommodate future patients. He further added that the government will do its best to accommodate everyone who comes from other parts of the country.

The number of confirmed cases in Delhi stands at 27,000+ with about 10,500+ recoveries till now. There has been a big increase in the number of cases being reported every day. These numbers are expected to double up in the next few weeks, causing worry for the citizens as well as the government. Overall, the number of cases in the country has reached a high of 2.7 lakhs. It is now being estimated that the number of cases will hit 5.5 lakhs by the end of July.