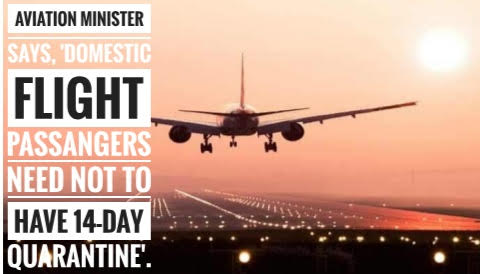 As restrictions slowly lift in select regions all over the country, domestic flights have also been allowed to resume their businesses. The airline industry has been one of the worst-hit sectors in the economy.

The Ministry of Civil Aviation issued new guidelines for flight operations from May 25, shortly after the Airports Authority of India released standard operating procedures.

Only one check-in bag and cabin baggage are going to be allowed, meal service won’t be provided onboard, the ministry said. It also advised vulnerable persons, including the elderly, pregnant women, and passengers with health problems to avoid aviation.

In regards to this announcement and the guidelines declared by the Aviation Ministry, the Union Civil Aviation Minister Hardeep Singh Puri said that there will be no 14-day quarantine for passengers on domestic flights. The minister said that only one-third of the flights are going to be allowed to work under strict rules when domestic flight services resume on May 25.

The Minister said that quarantining passengers would not be required as those who test positive during screening won’t be allowed to board the flights.

“I don’t know why we are making such a fuss on the quarantine issue…this is domestic travel. The same laws will apply here that apply when you travel by train or a bus… people that are positive won’t be allowed to board the flights… The quarantine issue is going to be addressed during a pragmatic manner.”

“The passengers are expected to certify the status of their health through the Aarogya Setu app or a self-declaration form. This system which we have followed of the middle seat not being kept vacant has worked…we take other corresponding preventive measures,” the Union minister said.

He further added that each aircraft will be disinfected after every flight and passengers will be tested through thermal screening and shall be required to wear masks. The crew members are to also wear protective gear.

The minister addressed the idea of keeping the middle seat empty to ensure physical distancing and stated that this would result in a 33% revenue loss for airlines, making it difficult for them to operate. The minister said that India has evacuated around 20,000 people stranded in other nations under the Vande Bharat Mission using the same method.

In reply to this announcement, Himanata Biswa Sarma, the Assam Minister said that his state would “prefer if those travelling on flights are quarantines.”