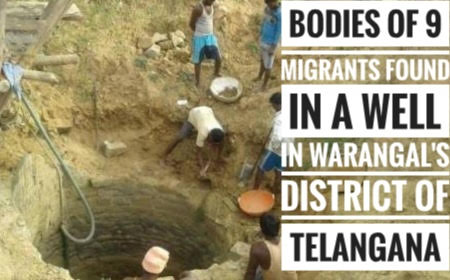 A horrific incident has been reported in Telangana in which nine bodies were found in a well near Warangal, stated the police. Out of them, eight have been recognised as migrant workers.

The incident has taken place in Gorrekunta village of Warangal. Four bodies were recovered on Thursday while the other five were pulled out on Friday.

Among them was a family of six of a migrant worker from West Bengal, two from Bihar and the other was a localite.

On late Thursday the bodies of Mohammed Maqsood (56), his wife Nisha (48), their daughter Bushra (24) and their three-year-old grandson were recovered. The rescue team dug up the rest five bodies on Friday. One amongst them was Maqsood’s son, two workers from Bihar and a local resident.

Maqsood used to work in a gunny bag stitching shop in Warangal. He along with his family resided in Kareemabad for nearly twenty years now. He was left jobless since the lockdown has been put in place. His owner provided them with shelter in his godown. The bodies were recovered from found a well close to the godown.

The police are still inquiring if it is was a case of mass suicide or murder. A special team has also been formed to investigate the matter, said Warangal police Commissioner V Ravinder.

“There are no external injuries on the bodies. The cause of their death will be known after we receive autopsy reports. We are probing the case from all angles,” he said.

A complaint has been registered at Geesukonda police station and the bodies have been sent to Mahatma Gandhi hospital in Warangal for autopsy.