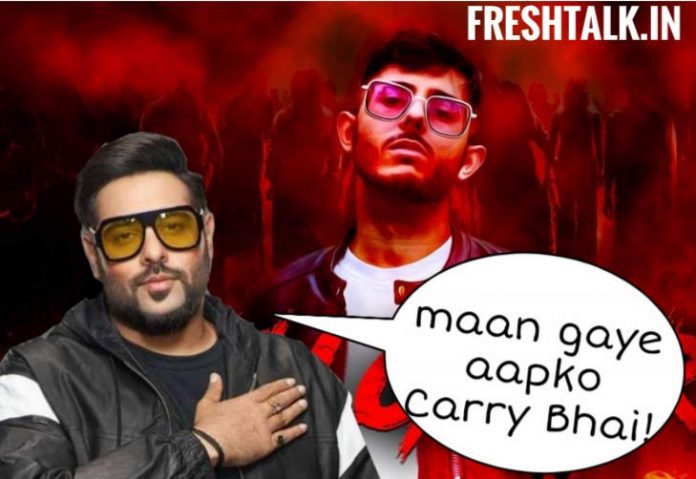 The famous YouTuber CarryMinati releases his latest rap song, “Yalgaar” dismissing all the trolls that bashed him over the “YouTube vs TikTok” controversy. Based on this achievement, Indian rapper Badshah congratulates Carry over his triumph.

On 8th May 2020, while the world was downhearted over The Covid-19 pandemic, YouTuber Ajey Nagar, widely known as CarryMinati uploaded a controversial video over YouTube vs Tiktok, as a response to the Instagram video of Tiktoker Amir Siddiqui which the public considered to be enraging and nonsense.

The video soon crossed lacs of views, breaking almost all the records of YouTube known to this date. But unfortunately, the public’s most liked and viewed video got taken down on the grounds of violating the site’s guidelines. Several famous Youtubers like Bhuvan Bam, Ashish Chanchlani as well people from all around the globe supported Carry while he himself remained low-key over the issue, silently planning his next moves.

On 5th June 2020 Carry released his rap song “Yalgaar” hitting back at the trolls, addressing his views on the betrayal and taunting on the people who put a knife on his back with a smiling face. And guess what? Good news fans! Yet once again, his video hit trending #1 on YouTube gaining more and more views each passing second!
On this remarkable achievement, the “Genda Phool” singer, Badshah, congratulates Carry publicly through his Instagram handle.

After his latest song got so many accusations of plagiarism, it feels a little better to know that he still possesses the quality of acknowledging and appreciating original entertaining content! After this groundbreaking rap song from CarryMinati, hopefully, rapper Badshah will be inspired enough to create his own trending songs, and this time, with no copyright issues!