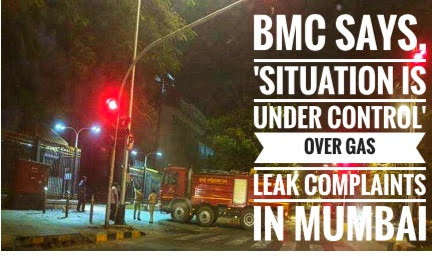 The Brihanmumbai Municipal Corporation (BMC) received complaints of a suspected gas leak from residents of Chembur, Ghatkopar and adjacent areas in Mumbai late Saturday night. But the BMC has assured that the situation is under control and people shouldn’t get panic-stricken.

BMC took to Twitter and wrote, “Situation is under control. All necessary resources have been mobilised. Origin of the smell is being investigated. 17 fire appliances are on field equipped with a public announcement system and ready for a response if required”.

They also tweeted, “We’ve received a couple of complaints of a suspected gas leak, from residents in Chembur, Ghatkopar, Kanjurmarg, Vikhroli & Powai…Please don’t panic or create panic. 13 fire appliances to monitor situation have been activated as a precaution”.

The source of the smell is still not found. Mumbai Fire Brigade’s (MFB) chief fire officer PS Rahangdale reported no kind of gas leakage has been traced at given places. He said, “Further calls were received from Powai and leakage smell was felt in Andheri. Total 17 fire engines were deputed for the search of gas leakage and it was announced to not panic. Hazmat vehicles were ready for emergency”.

Complaints of the gas leak were registered by residents of Chembur, Ghatkopar, Powai and Vikhroli on Saturday night, informed an official of BMC Disaster Management Cell.