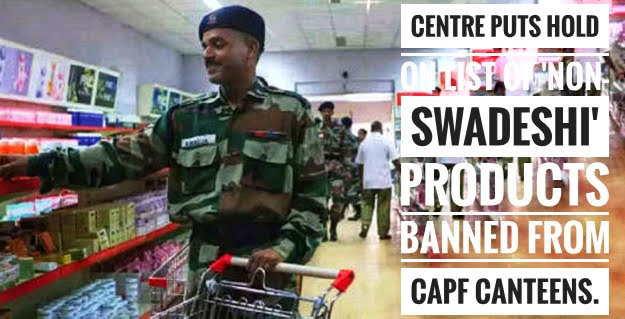 The Union government’s ‘Vocal for Local’ call got enmeshed in controversy after the order was circulated by the Central Police Canteen (CPC) that delisted 1,000 Indian goods. The order was withdrawn within an hour after it caught the attention that the banned goods included Indian companies too.

The order brought out by CPC in-charge DIG RM Meena stated, “In pursuance to the decision taken by Ministry of Home Affairs, only Swadeshi goods will be sold through KPKB bhandars with effect from 1st June 2020”. The order further mentioned that CPC canteen sold products in three categories and the third category of goods included the purely imported ones which have been prohibited.

Almost immediately, the Ministry of Home Affairs controlled the situation by ensuring that a fresh list is soon issued. An MHA official reported, “The officer who issued the order exceeded the brief. Action is being contemplated against him”.

Home Minister Amit Shah on May 13 tweeted that the central police canteens will only sell “Swadeshi” from now. It renders service to almost 10 lakh paramilitary personnel and 50 lakh family members.

The issued order under DIG RM Meena claimed that it had the approval of competent authority, though MHA doubts it.

Once the order is enforced, a total of 1,026 foreign products including chocolates, shoes and devices will be taken down at all central paramilitary forces canteen throughout the country.