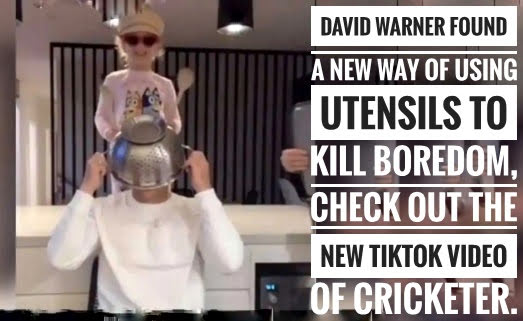 Amid the lockdown due to spread of pandemic Covid-19 the cricketer David Warner continues to be becoming bored at home. However, he is doing his best to keep his followers entertained enough. David Warner shared his newest TikTok video in which he starred as drum turned trumpet. He used his household as an instrument to play the 20th century Fox theme music.

Australian cricket team opener shared the video on his Instagram handle. In the video, he was seen with metal boul over his head which his daughter used as a musical instrument.

Warner’s daughter used few ladles as a drumstick. His wife Candice determined to go grander and used a metal tray. Then warner pushed up the bowl noise the tune in a high pitched voice.

Warner captioned the video as, “Nonetheless bored in the home. Who says these utensils are only for cooking,”.

This is not the first time when Warner used the kitchenware with a motive to play music, in a video shared by him earlier one can see Warner using wine glass and some kitchen accessories play “Stand by me” of Marvin Gaye’s.

Warner has been very famous on TikTok since his very first video which was with his daughter on the Bollywood hit “Sheila ki Jawaani” since then Warner made new methods to keep his fans entertained along with his households as a partner in crime.