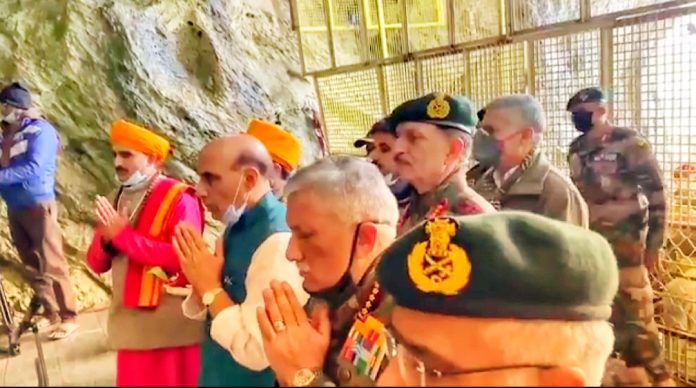 Defence minister Rajnath Singh prayed at the Amarnath caves today amid his 2 day visit to Jammu and Kashmir.

Such a step was taken after threats were received about how terrorists were trying to hamper with the pilgrimage route at National Highway 44.

“There are inputs that terrorists would try their best to target the yatra. NH-44 continues to be sensitive because that is the route that the yatris would take to go up to the north routes”, said Brigadier VS Thakur.

The defence minister has announced that there is no need to worry and that the army will ensure that the pilgrims have a safe journey to the religious site.

“Feeling extremely blessed after praying at Shri Amarnathji Holy Cave in Jammu and Kashmir. बर्फ़ानी बाबा की जय!”, he tweeted along with a video of the group praying at the cave.

During this visit to Jammu and Kashmir, he is being accompanied by Army chief MM Naravane and Chief of Defence Staff Bipin Rawat. The group is also to assess the military preparedness in the region along with the ground situation in the area after their clash between China.

Para dropping exercises were conducted by the army in the presence of the trio along with various military drills. He also assessed the LOC situation with Pakistan and it has been alleged that there have been ceasefire violations from their side.