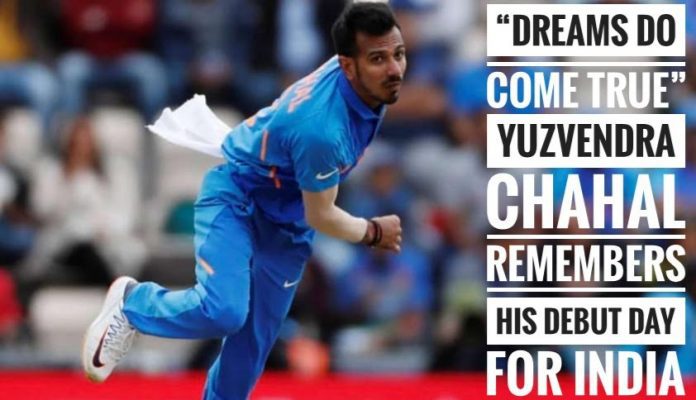 The Champion bowler of the Indian cricket team, Yuzvendra Chahal played his first match for India on June 11, 2016, He shared his feelings on social media as he celebrates his four years in International cricket today.

Yuzvendra Chahal is one of some players who cemented their position in the National team soon. The 29-year old leg spinner, made his International and T20 debut against Zimbabwe four years back, Today on 11 June 2016. During the match, Chahal bowled his full quota of 10 overs with figures of 1/27.  Since then, Chahal has gone on to play 52 ODIs for India and has claimed 91 wickets with an economy rate of 5.07. In T20Is, the bowler has featured in 42 games and has five wickets with an economy rate of 8.18.

In his Instagram post, Chahal shared his personal mantra for achieving success, “Enjoy the game and chase your dreams. Dreams do come true”, He said.

Further, he expressed his emotions saying that His dream came true on 11 June 2016, when he got the first grand opportunity for a career in cricket to play for the Men in blue in the International ODI, against Zimbabwe at Harare.

On 1 February 2017, He played against England and became the first bowler to take a 5-wicket haul in a T20 match.
In the Indian Premier League, Yuzvendra Chahal plays for the Royal Challengers Bangalore. He is immensely loved cheered by his fans for his performance in IPL. The leg-spinner is a key player for the RCB in the cash-rich league. Yuzvendra Chahal has played 84 matches in the IPL and has picked up 100 wickets with an economy rate of 7.78.
However, Yuzvendra Chahal is yet to make his debut in the longest format of the game for India.