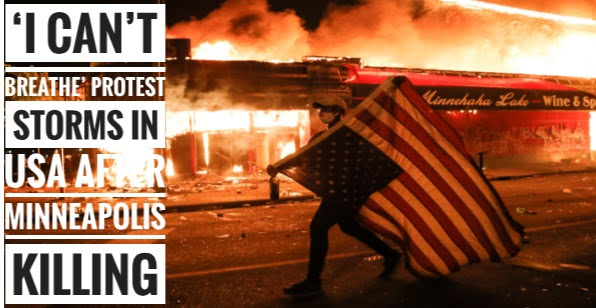 Thousands of protestors stormed the city of New York as the protests spread across the United States upon the killing of African-American
black man, George Floyd, who was pinned by the neck under a white police officer’s knee. Police officers made arrests of many protestors
after the massive demonstration in Brooklyn and the protestors were loaded into city buses lined up on Atlantic Avenue, shutting down a
major thoroughfare. A diverse group of protesters cheered up on hip hop music and argued about the police brutality with the police
officers in the riot gear.

The demonstrators at a “We can’t breathe” vigil and rally in lower manhattan were pressing for legislation outlawing the police “chokehold” employed by a city policeman within the 2014 death of Eric Garner, who was also black.

Atlanta, Bernice King, the youngest daughter of civil rights icon, Martin Luther King Jr. Requested people to go homes after 1,000 protestors marched to the city capital from Centennial Olympic Park, blocking traffic and interstate highway. The demonstration at Atlanta turned chaotic and violent by the time. Fires were burning downtown the CNN headquarters, the network’s headquarters. Police cars were burnt and windows were smashed at the CNN building when police tried to push back the crowd, they threw bottles on them.

Minneapolis, the protestors denied the 8 pm curfew and marched to the police station burnt the previous night. “We are out here because
we, as a generation, realize things need to change,” said one marcher, Paul Selman, a 25-year-old Black man, who had just graduated with a master’s degree in English from Minnesota State. “We need peace.”

Detroit, protestors joined a “March against Police Brutality” late in the afternoon outside the Detroit Public Safety Headquarters. Many chanted, “No justice, no peace.” Some carried signs that read, “End police brutality” and “I won’t stop yelling until everyone can breathe.”

Denver saw a second-day protest as the protestors march downtown demanding justice. On Thursday, the police fired tear gas and rubber bullets to disperse crowd, 13 arrests were made.

Houston, hundreds of protestors gathered on Friday in a protest organised by the Black Lives Matter group. The crowd spilt and chanted, “I can’t breathe,” and “No justice, no peace.”

Louisville, after an evening of violence during which a minimum of seven people was shot, police within the Kentucky city braced for more protests over the killing of Floyd and a number of other others, like Breonna Taylor, shot by police in her Louisville home in March.