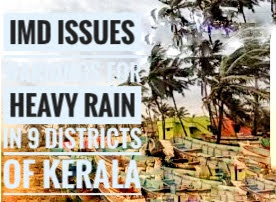 The weather department had previously predicted monsoons to hit Kerala on the first of June. Also, those staying near coastal areas are being asked to take the necessary precautions.

The Kerala State Disaster Management Authority (KSDMA) said that it foretells heavy rainfall. The areas that have been isolated are likely to receive rainfall of 64.5 mm to 115.5 mm in 24 hours. Also, the yellow alert has been issued to warn the public and concerned officials, about the depth of the situation.

The people living in coastal areas, along with those living near riverbanks and areas that are prone to floods and landslides, have been asked to look out for strong winds and rain, and take necessary precautions.

With the monsoon slowly hitting the coast and entering the state, Yellow alert has been issued for five districts- Ernakulam, Thrissur, Malappuram, Kozhikode, and Kasaragod, on 2 June; and Kannur and Kasargod on 3 June.

Also, a low-pressure area is being built on the western coast in the Arabian Sea. And this will turn out into a cyclonic storm and will move into Maharashtra and Gujarat. Thus, rainfall is predicted in these states on 3 and 4 June.

Also, fishermen are advised not to venture into the Arabian Sea for a few days.