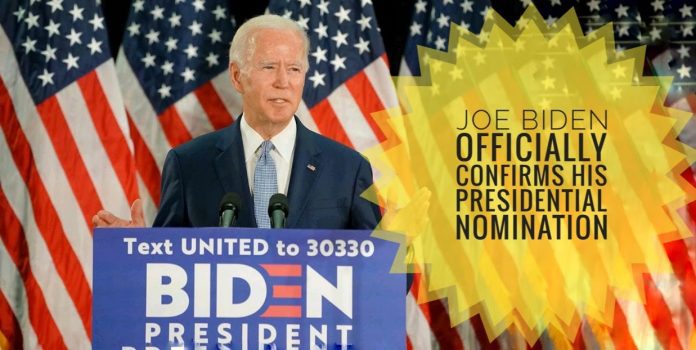 Former US Vice President has officially clinched the Democratic Presidential nomination for his general election in November to dethrone President Donald Trump.

Joe Biden achieved his milestone helping him secure 1,993 delegates to the national convention. Results were shown this Friday evening, Mail-in ballots from Indiana, Pennsylvania and Rhode Island, pushing Joe to the top, after Vermont Senator Bernie Sanders withdrew from the primary election.

At the age of 77, Joe Biden would be the oldest president ever elected in US history. He became the democratic party nominee after serving 8 years as a Vice president under former President Barack Obama and he even served more than 35 years as a senator from Delaware.

“It was an honour to compete alongside one of the most talented groups of candidates the democratic party has ever fielded…am I’m proud to say that we are going into this general election, a United party” Biden said in a statement. He promised that he is going to spend every day to earn the votes to win the battle for the “soul of the nation”, in his recent tweet.

He accused and attacked Trump for the response of Wave of protests over the heated racism and police brutality in the US, with the killing of a black American man, George Floyd. “This is a difficult time in America History”. “And Donald Trump’s angry, divisive is no answer” in a statement by Biden.

“The country is crying out for leadership. Leadership that can unite us. Leadership that can bring us together”, stated Biden after associated press called the nomination. “We need an economy that works for everyone…now”. “We need a job that brings dignity to …now. We need equal justice… and equal opportunities… for all American now. We need a president who cares about helping us heal ..now”, said the 77-year-old democratic leader.