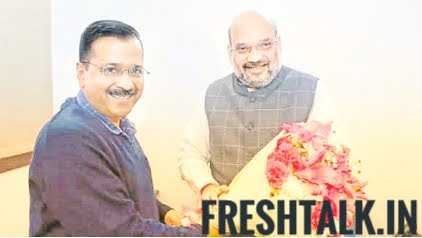 Chief Minister Arvind Kejriwal and Home Minister Amit Shah met at 11 am. The meeting reviewed the COVID-19 situation in the national capital. This is the second meeting between the two of them to discuss the pandemic. Other people at the meeting are the director of AIIMS, Lt Governor Anil Baijal, Dr Harsh Vardhan and members of the State Disaster Management Authority. This is the second meeting between Amit Shah and Kejriwal in less than a week.

Several important decisions were taken at the meeting in order to handle the deteriorating situation in Delhi. Amit Shah announced that BJP is dedicated to controlling the spread of COVID-19. He announced that testing in Delhi will double in the next few days and tripled after 6 days. The Modi government will also provide 500 railway coaches to Delhi to aid for the shortage of beds.

These will be equipped to fight COVID-19. House to house surveys in containment zones will also take place. In addition to these, the committee in AIIMS will be created to inform other hospitals about correct guidelines and information about Coronavirus.

Previously, Kejriwal did not attend certain meetings as he came down with fever and throat pain, making him undergo the COVID-19 test, where he tested negative. The meeting looked at strategies that can be adopted in order to provide beds for patients, testing facilities, better healthcare infrastructure, curb the spread of the virus etc.

In a virtual rally, Union Minister Smriti Irani disapproved Arvind Kejriwal’s method and said that he’s failing to attend to the situation at the ground level by not stepping out and assessing the situation. She also praised Health Minister Harsh Vardhan for visiting hospitals and quarantine centres. The Supreme Court ridiculed AAP’s patient care “horrendous, horrific and pathetic “. They have also asked the government to increase the number of beds and ventilators in hospitals to aid all patients that come for treatment. Arvind Kejriwal has now announced that they will increase the number of beds available by adding 5000 new beds.

There is also a separate meeting in the evening between the home minister and the mayors of the three municipalities of Delhi – North, South and East, alone with commissioners of the civic body in order to prepare a plan for the national cap total.