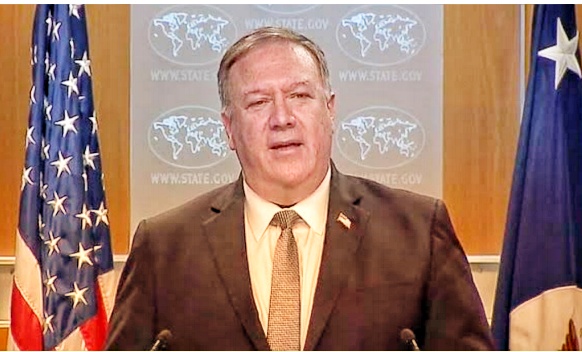 The United States had understood the risk that was emanating from those Chinese telecommunication infrastructure in the India, which forced the recent decisions of banning Chinese apps in India, said US Secretary of State, Michael Pompeo on Wednesday.

The US had discussed with the Indian government about the “risks” posed by Chinese communication networks, including the so-called 5G network, possessing to the treasured freedoms of people, Secretary of State Mike Pompeo has said, amidst the Trump’s administration stepped out of its pressure against the Chinese telecom giants. President Donald Trump has been asking American firms to stop going further in business with the Chinese telecom ‘Huawei’, alleging that it was a tool to Chinese intelligence.

“India has been a great partner of the US. I am going to speak to the US India Business Council here in a couple of hours. They are an important partner of the US. We share a great relationship with my Indian Foreign Minister – S Jaishankar counterpart,” Pompeo said at a press briefing.

He continued, “India and the US have had held several discussions about this broad range of issues, including the border conflict with Chinese troops. We have also talked about the risks emanating from the presence of the Chinese telecommunications infrastructure in a country. It is these risks which led to India imposing ban on Chinese apps.”

Pompeo told reporters, at this joint press conference with the Indian counterpart S Jaishankar, and Home Minister Rajnath Singh and the US Defence Secretary Mark Esper that this 5G issue was discussed during the second edition of this ministerial dialogue between India and the US there on Wednesday.

“I think the whole world is joining hands to face the challenge that we face. It is the democratic nations which will win these challenges. I am confident,” Pompeo stated.

China for retaliating US sanctions over Xinjiang issue, the top diplomat said, “I heard that China is using tit-for-tat policy after the US imposed sanctions on the Chinese envoys involved in atrocities on Xinjiang. I would like to tell them that this is not some tit-for-tat exchanges. America is standing up for its own people in the world.”

“And on China, we discussed the risks that Chinese-built communication networks, including 5G, pose to our treasured freedoms and how China’s unfair and predatory economic activity in the Indo-Pacific presents a risk to those very freedoms,” Pompeo said.

“The United States urges all countries, including their partners and allies, to adopt with a national security policies that would prevent untrusted vendors from accessing any part of their future 5G networks,” Ortagus had said.

5G is the next generation technology with the download speed stated to be 10 to 100 times faster than that of current 4G LTE networks.

Mike Pompeo says, ‘The US is reviewing its military deployment to counter China’s threat to India and other countries’