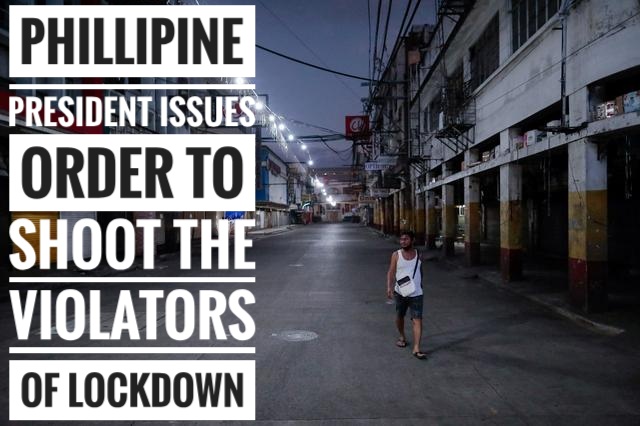 The Filipino President, Rodrigo Duterte has issued a warning on those who would violate his government’s lockdown order. The lockdown is one of the measures put in place to combat the COVID-19 pandemic. Duterte’s warnings came as a response to protests by the Manila residents over shortage of food. This warning was issued through a televised address. His attention was drawn to the physical abuse and discrimination netted out to the health workers. President Duterte warned that violence and discrimination against medical practitioners would not be tolerated by his administration.

He pointed out that it was very important that everyone should cooperate and adhere to the lockdown and quarantine instructions so as to enable the country’s poor health care system contain the spread of the virus. In his words, “It is getting worse. So once again I’m telling you the seriousness of the problem and you must listen”. He later said, “my orders to the police and military…If there is trouble and there’s an occasion that they fight back and your lives are in danger, shoot them dead”. “Is that understood?, dead. Instead of causing trouble, I will bury you .“
In response to this, human rights activists have accused Duterte of inciting violence through his statements. They fear that his outrage could lead to violent response from the people through rioting and unrest. The activists likened his recent outrage to his war on drugs. During which the police killed thousands of people suspected of selling drugs

The corona virus has since been declared a pandemic by the WHO. More than 1million people have been reported to have contacted the virus worldwide. In Philippines, there have been 2,311 confirmed cases with 96 deaths. Recently, at least a hundred new cases of COVID-19 are being reported daily in the Philippines.