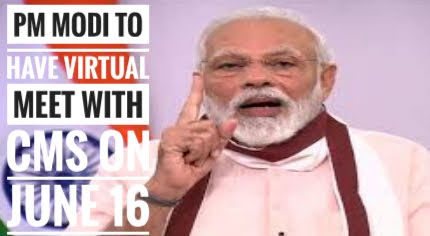 Prime Minister Narendra Modi has scheduled a meeting with the CMs to talk about India’s future steps on June 16. The Chief Ministers of at least 21 states/ union territories are to attend this meeting. The meeting will be held over video conference and will extend up to 17th June 2020. This would be the first interaction between all of them after a vast spread of COVID-19 in areas like Delhi, West Bengal, Tamil Nadu and Maharashtra etc. Previous meetings amongst them happened before this “unlock” stage.

The number of cases in these states increases in thousands every day, with Maharashtra having almost one lakh confirmed cases. Earlier, the main concern in this region was to stop the virus from spreading into the large Dharavi slum, which infected, would be almost impossible to stop.

Meanwhile, the numbers in Delhi, West Bengal and Tamil Nadu stand at 34000+, 9,700+ and 38,000+ respectively. Even though a major part of the country is no longer a lockdown, West Bengal and Mizoram have extended lockdown citing the reason as a sudden spike of cases.

A major concern for the government and hospitals is its ability to accommodate people as cases go up. It is estimated that the number of cases in Delhi will reach up to 5.5 lakhs in July. To put more pressure on this task, Lt Governor had announced that the state-run hospitals will continue to treat people coming from other states as well. The government has now changed its discharge policy as a method to accommodate more patients. The new policy recommends discharge of patients without a second test as soon as their symptoms resolve. Kejriwal has also advised that asymptomatic cases should defer from being tested as the government should prioritise people with
mild and moderate symptoms. The results for the meeting with Modi are much awaited.