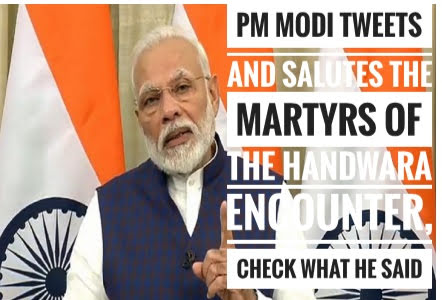 On Sunday, five security personnel were martyred in an encounter occurred in the Chanjmulla area of Handwara, which is part of north Kashmir’s Kupwara district. Five security personnel included a Colonel, Major, two senior officers of the Indian Army and a sub-inspector of J&K police. The security forces executed two terrorists, one of the terrorist is Lashkar-e-Taiba (LET) chief ascertained as Haider. The second terrorist is yet to be recognized.

PM Modi paid tribute on twitter by tweeting, “Tributes to our courageous soldiers and security personnel martyred in Handwara. Their valour and sacrifice will never be forgotten. They served the state with utmost dedication and worked tirelessly to guard our citizens. Condolences to their families and friends”.

Director-General of Police Dilbagh Singh stated that amongst five security personnel killed in an encounter a Colonel and a Major were killed at a village in north Kashmir’s Handwara area.

“A team comprising five Army and JK Police personnel entered the target occupied by the terrorists to evacuate the civilians. The team of Army and JK Police entered the area and successfully extricated the civilians, an officials statement of the army said.
“However, during the tactic, the team was subjected to a heavy volume of hearth by the terrorists. In the ensuing firefight, two terrorists were eliminated and thus the team of 5 armies and JK personnel, comprising two Army officers, two Army soldiers and one JK Police Sub Inspector, attained martyrdom,” the official statement added.

In the encounter Army officer Colonel Ashutosh Sharma, Major Anuj Sood and Lance Naik Dinesh and sub-inspector of JKP Shakeel Qazi were martyred.
The officials said the Army officers were leading a team to rescue civilians who had been taken hostage by the terrorists.

As per the official statement, “Based on the intelligence input that terrorists were taking the civilian inmates of a house in Changimulla, (in the) Handwara (area) of Kupwara district, hostage, a joint operation was launched by Army and JK Police. A team comprising of five Army and JK Police personnel entered the target area occupied by the terrorists to evacuate the civilians”.

Defence Minister Rajnath Singh expressed the condolences and paid tribute to martyred Army officers. He tweeted, “The loss of our soldiers and security personnel in Handwara(J&K) is deeply disturbing and painful. They showed exemplary courage in their fight against the terrorists and made supreme sacrifice while serving the country. We will always remember their bravery and sacrifice (sic)”.

“I offer my tributes to the soldiers and security personnel who fell in action. My heart goes out to the families who lost their loved ones today. India stands shoulder to shoulder with the families of these brave martyrs,” he added.
Chief of Defence Staff Bipin Rawat said the operations in Handwara highlighted the determination of the security forces to safeguard the lives of the people.
Former J&K chief minister Omar Abdullah also expressed solidarity and paid tribute to the martyred security personnel.