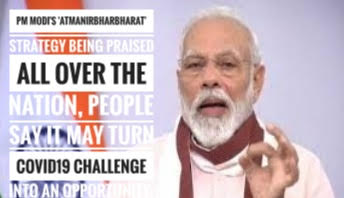 Prime Minister Narendra Modi addressed the nation on Tuesday, 12 May regarding the plans of the government post-May 17 which was to be the last day of the Third Phase of the nationwide lockdown to fight the global COVID-19 pandemic.

“Key points of the speech”

In his address, he highlighted three main points to tackle the COVID-19 virus due to the
unprecedented spread in the population. Narendra Modi announced that the Finance Ministry shall be announcing a Special Covid-19 economic package on 13 May, which would amount to Rs 20 Lakh Crores and would seek to benefit the poorer sections of society.

Further, he stated that there will be a Lockdown 4.0 which shall have new rules and would be relatively different from the previous lockdowns as we must move ahead.
He also announced the beginning of the Atman Nirbhar Bharat Abhiyan which was a movement to make the country self-reliant in this year by taking control of the opportunity provided by the pandemic rather than looking at it as a challenge. He also stated the Five Pillar Model that India will build its structure of self-reliance.

“Praise for the plan”

Several BJP leaders spoke up in support of this movement, agreeing with Modi on self-reliance being the need of the hour.
BJP chief JP Nadda praised Narendra Modi and the financial package. “In the times of
Covid-19, PM Narendra Modi is leading the country from the front,” he says. “The 21st century will be defined by India, PM’s message today has laid the foundation stone for implementing this. Aatmanirbhar Bharat is our mantra for the driving country towards this new change.”

The Union Health Minister Harsh Vardhan tweeted, “1.35 billion Indians idolize #PMModi Ji for his nationalistic zeal & his bid for a #SelfReliantIndia that is a superpower by itself, not at the mercy of others. An #Economicpackage of 20 lakh crore which is 10% of India’s GDP shall ensure an #atmanirbharbharat !#Lockdown4.”

The former Chief Minister Vasundhara Raje also tweeted in support of the movement. “The Modi Govt’s announcement of an Rs. 20 Lakh Crore’s economic package is a positive step towards helping the nation get back on its feet.PM Shri @narendramodi Ji stressed the need to build an #AatmanirbharBharat and this financial boost is sure to aid in achieving this goal.”

“Vocal for Local’ to strengthen all sectors of the Indian economy.”

Union minister Prakash Javadekar praises the financial package announced by the prime
minister in his address to the nation. “This is the biggest package India has ever seen,” he tweets. “Aatma nirbharta [self-reliance] is the new mantra.”

However, opposition party leaders, as well as the citizens in the country, found little merit in Modi’s speech.

Many highlighted that the ambiguity of the details provided had no positive impact on the
populations as it just added to the concerns of the citizens.
Others pointed out that the actual package would not be worth Rs20 lakh crores, rather it would amount up to 10 percent of the GDP only when summed up with the existing package and the decisions of the RBI.

Congress spokesperson Sushmita Dev said that the Rs 20 lakh crore package that the prime minister announced includes what is already being done. “We need to do the maths to ascertain what we get out of this after the minister of finance announces the small print,” she added.

Chhattisgarh Chief Minister Bhupesh Baghel criticized the financial package and says it should have been announced earlier, “It isn’t clear what’s within the package for labourers, farmers, traders, and MSMEs,” he says. “Tomorrow the minister of finance will clarify it then only it’ll be clear which sector is getting what.”

Social Media platforms were flooded with memes ridiculing the speech and calling it a waste of time as Narendra Modi “is yet to get to the point.”

The Trinamool Congress called the prime minister’s address “incomplete and disappointing”, claiming that there’s no proper direction on how the special economic package are going to be used, PTI reports. “Most of his speech was all about boasting about his government’s so-called achievements,” Trinamool Congress MP Sougata Roy claims. What will happen after May 17, there is no clear indication regarding it. He spoke about lockdown 4.0, but what is going to be its structure nobody knows.”
Others pointed out the issues with the Atman Nirbhar agenda highlighting the lack of proper planning and transparency and the already falling state of the economy.