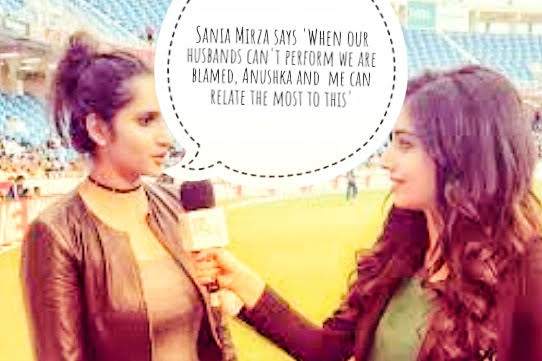 Sania Mirza has always given her firm replies to those whose stereotypical approach and ideas stand in front of her. She never was a part of any controversy and has always stood for herself or any other female.

People usually claim that females are a great distraction for men. They say this if this is just like any other phrase. But they don’t realize that their this approach of concept and idea is so not acceptable.

Sania mirza said that people blame the wife and girlfriend of a respective person especially a sportsperson if he doesn’t score well in his match.
Their sayings become the headlines of the newspaper the very next day and become a spiced up topic to have gossip on.

She when was asked about this by a media person, she immediately replied, it was funny because I and Anushka probably relate to that the most. I think whenever our husbands perform, it’s because of them, whenever they don’t perform it’s because of us. I don’t know how that works. We are saying it as a joke but I think there is a much deeper issue. The deeper issue is that a woman can always be a distraction and not a strength. That’s a cultural issue we have to deal with. Oh ‘if your girlfriend is there or your wife is there, he must be distracted because he is going out for dinner’. That doesn’t even make any sense.

It is the need of the hour to change the mentality. It’s 2020 and yet we have a mindset of what like the era of the Mughals?

Not only Sania mirza but Anushka Sharma has also been the face of a newspaper with a headline stating that she was a distraction for Virat while he was playing.

When ESPN Cricinfo tweeted, couple goals Mitchell Starc to miss ODI and be there for Alyssa Healy’s #T20worldcupfinal it was then that Sania mirza spoke and said what she all had in her mind.

IPL 2020- Hardik Pandya is working all set for the season, shares workout pictures