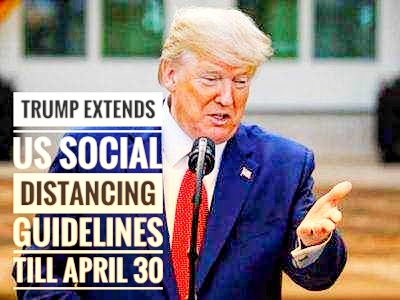 On Sunday,March 29,President Donald Trump extended strict social distancing guidelines for the US to April 30. The death toll in the US regarding the Corona virus cases continue to rise. The New York times reported more than 141,000 Covid-19 cases in the country,with almost 2,500 deaths as at Monday morning.

According to the data showed to president Trump by his public health experts it was easy to indicate that easing social distancing too quickly will escalate the number of cases and deaths. President Trump also said that all Americans must continue to avoid non essential work,travel and eating at Restaurants and Bars as well as not gathering in a group of more than 19 people.

“We can expect that by June 1,we will be well on our way to recovery”. We think by June 1 a lot of great things will be happening”. Mr Trump said.

A member of the White House Corona virus task force and the country’s top infectious diseases expert, Dr Anthony Fauci had estimated that 200,000 people could die from Corona virus in United States.

The idea that we may have these many cases played a role in our decision in trying to make sure that we don’t do something prematurely and pull back when we should be pushing”. Fauci said.

Mr Trump also talked about “the viciousness” of the virus and revealed it had sent a close friend to the hospital. “He’s a little older and he’s heavy. But he’s a tough person, and we went to the hospital and a day later he was in coma, How is he doing? “Sir he is in coma. He’s unconscious. He’s not doing well”. The spread and the viciousness,especially if it gets to the right person, it is horrible”. Mr Trump has for weeks compared the virus to the flu.

On Saturday,a baby in Illinois became the first infant to die of Covid-19. In a move made on Saturday,the US centers of Disease control and prevention urged all residents of three states surrounding New York to refrain from travel to other states over the next 14 days to help stop the spread of Corona virus.

President Trump has currently signed a $2 trillion package into law. This is to enforce $1,200 to millions of Americans,including those earning up to $75,000 dollars,along with $500 dollars per child as well as also give an additional 13 weeks unemployment aid and a 4 months enhancement of job benefits.

The package also includes $377 billion in federally guaranteed loans to small businesses and the creation of a $500 billion government leading program for distressed companies.

In Florida officials have closed down all beaches in the state after young spring breakers ignored social distancing guidelines and partied on the sand. Florida now has 5,000 cases with 59 deaths.

All over the world cases have neared 738,000 with the death toll at 35,000 on Sunday. India ordered a 21 day shutdown while Japan’s prime minister Shizo Abe and international Olympic committee president Thomas Bash agreed to postpone the Olympics in that country.

America’s president also denied that he had threatened to quarantine New Jersey, New York and Connecticut despite suggesting 24 hours earlier that he was seriously considering that. The president also seemed to suggest that New York hospitals were lying about the number of masks needed.

Most of America’s governors said that they anticipated lots of cases during the next several weeks and urged their residents to follow social distancing guidelines that will slow the spread of the pandemic.